United Church Condemns Attack on Muslim Family in London, ON

We invite people to pray and engage in acts of solidarity. 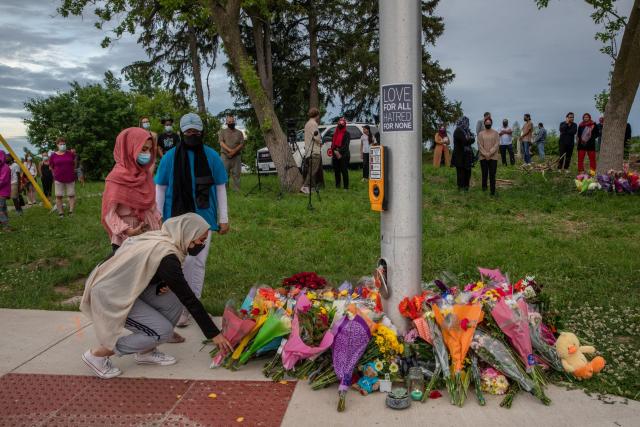 Mourners leave flowers at the site where a family of five was hit by a driver in London.
Credit: THE CANADIAN PRESS/Brett Gundlock
Published On: June 9, 2021

The United Church of Canada strongly condemns the horrific hate-filled attack that killed three generations of a Muslim family in London, Ontario on Sunday, June 6.

In his letter to the Romans, the apostle Paul writes: “[R]ejoice with those who rejoice, weep with those who weep. Live in harmony with one another” (Romans 12:15‒16a). Many people in the United Church are weeping alongside the extended families and friends of the family members who were killed and injured in this premeditated hate crime and  are grieving the innocent lives lost in this abhorrent attack. People in the church are also pained that some in the Muslim community feel alienated and more fearful for their lives and well-being as a result of this xenophobic and deadly assault. It is particularly distressing that such terrorist attacks re-traumatize Muslim people, who hold in their collective consciousness the murders of Muslims at mosques in Quebec City in 2017, in Christchurch, New Zealand, in 2019, and in Toronto, Ontario, in 2020.

The United Church recognizes Islam as a religion of peace, mercy, justice, and compassion and has affirmed that the church wants to journey toward reconciliation, understanding, and cooperation with our Muslim neighbours. The church is deeply committed to working with Muslims and others for peace and justice for all humanity and to seeking ways to build right relationships among us. The church’s study, “That We May Know Each Other: United Church-Muslim Relations Today” encourages “seeing Muslims as neighbours, as friends, and most of all as people whom God has called to faithfulness.”

The church joins with people across the country in condemning these attacks of overt hatred, including the National Council of Canadian Muslims, the National Muslim Christian Liaison Committee, the Ontario Human Rights Commission, the Prime Minister of Canada, and many political leaders.

The National Council of Canadian Muslims, which also tracks anti-Muslim incidents, has documented 322 hate crimes between 2013 and 2019. According to Statistics Canada, between 2015 and 2019, there was a 14 percent increase in police-reported hate crimes against Muslims.

The United Church decries a White supremacist system and culture that allows feelings of racial, cultural, and religious superiority to flourish and that enables such heinous hate crimes to occur. The church’s anti-racism policy, “That All May Be One” declares that “we believe that we are all equal before God.” The United Church therefore reaffirms its commitment to anti-racism, to engaging in interfaith dialogue, and to speaking out against violence and discrimination rooted in racial superiority, including Islamophobia.

The Moderator of the United Church has condemned the attacks and offered prayers. People in the United Church are also invited to pray, to engage in acts of solidarity with Muslim neighbours, to take concrete actions to combat Islamophobia, and to participate in community vigils to honour the lives of those affected.

We pray for peace among all peoples; God, hear our prayer.