Join the Thursdays in Black Movement 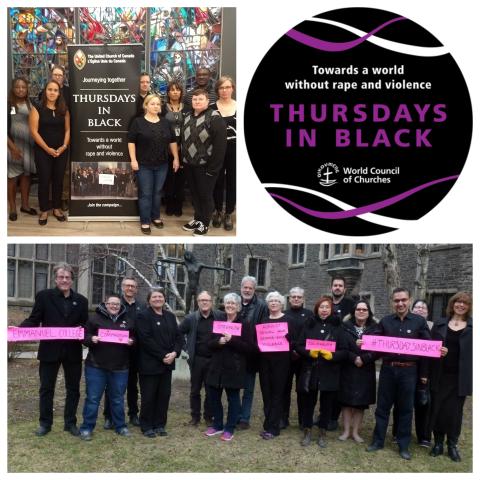 God cares for those who suffer and calls on us to work with each other for the healing of the world. The United Church’s Song of Faith (2006) lifts up the church’s purpose, including “fierce love in the face of violence, [and] human dignity defended.”

We all have a responsibility to speak out against violence and to ensure that all are safe from gender-based violence in homes, schools, work, streets—in all places in our societies. As a member of the World Council of Churches (WCC, a worldwide fellowship of Christian churches), the United Church takes part in the Thursdays in Black campaign against rape and violence. Through the simple gesture of collectively wearing black, participants create an international public witness for a global movement urging an end to gender-based violence.

Every Thursday, people of faith are encouraged to stand in solidarity with all people who bear the scars of violence and demand an end to gender-based violence.

1. Plan a worship service related to gender-based violence with the use of these resources:

2. Participate in “Thursdays” in Black on a Sunday!

Order Thursdays in Black buttons from the Women's Inter-Church Council of Canada (WICC), and make them available to your community of faith or small group. Restore: Ending Violence against Women is WICC’s resource against gender-based violence that can be used in congregations and small groups.

3. The National Inquiry into Missing and Murdered Indigenous Women and Girls completed its work in a closing ceremony on June 3, 2019. Transformative legal and social changes are needed to resolve the crisis that has devastated Indigenous communities across the country. Learn more at MMIWG Final Report and Calls for Justice.

Thursdays in Black has its roots in the 1970s and 1980s Argentinian movement “Mothers of the Plaza de Mayo,” referring to mothers who protested against the policy of having dissidents “disappeared” (a term used to describe people killed during political violence). These mothers assembled in the Plazo de Mayo in Buenos Aires every Thursday to register their protest with the authorities.

Thursdays in Black was started by the World Council of Churches in the 1980s as a form of peaceful protest against rape and violence, especially that which takes place during wars and conflicts. The campaign was revived, largely as a social media initiative, by the WCC in 2013.

The United Church stands in solidarity with all victims of gender-based violence, and celebrates initiatives (such as Thursdays in Black) that foster awareness and enable more voices to be heard.