The crest is the official signature of The United Church of Canada, as well as a spiritual and historic reminder. 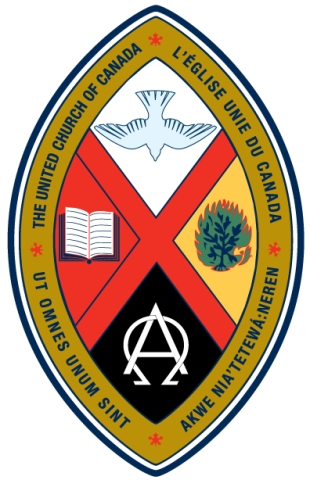 The crest is the official signature of The United Church of Canada, placed on legal documents, ordination and commissioning certificates, and licences to perform the sacraments. Designed by the Rev. Dr. Victor T. Mooney (a treasurer of the United Church), it was officially adopted in 1944 by the 11th General Council.

For our church members, this insignia is a spiritual and historic reminder. Its oval shape is derived from the outline of a fish, a symbol of identity by early Christians. The initials of the words "Jesus Christ, Son of God, Saviour" spell the Greek word for fish.

The crest is designed in the form of a St. Andrew's Cross with an insignia in each of the four corners. The "X" at the centre, the first letter of the Greek word for Christ, is a traditional symbol for Christ. In the four corners of the crest are symbols, three of which are particularly associated with the three communions—Congregational, Methodist, and Presbyterian—that united to form The United Church of Canada in 1925.

The open Bible represents the Congregational Churches with their emphasis upon God's truth that makes people free. From this communion we have a heritage of liberty in prophesying, love of spiritual freedom, awareness of the creative power of the Holy Spirit, and clear witness for civic justice.

The dove is emblematic of the Holy Spirit (Mark 1:10) whose transforming power has been a distinctive mark of Methodism. Here our heritage is one of evangelical zeal, concern for human redemption, warmth of Christian fellowship, the testimony of spiritual experience, and the ministry of sacred song.

The burning bush is the symbol of Presbyterianism. It refers to the bush that burned and was not consumed (Exodus 3:2), and symbolizes the indestructibility of the church. From Presbyterianism we have received a heritage of high regard for the dignity in worship, the education of all people, the authority of scripture, and the church as the Body of Christ.

The symbols alpha and omega in the lower quarter are the first and last letters of the Greek alphabet. They symbolize the eternal living God, in the fullness of creation (Revelation 1:8).

The Latin words ut omnes unum sint that surround the symbols on the crest mean "That all may be one" and are taken from John 17:21. They are a reminder that we are both a "united" and "uniting" church.

In 1980, a French translation of The United Church of Canada—L'Église Unie du Canada—was authorized by General Council to be added to the crest.

In August of 2012, at the 41st General Council, The United Church of Canada acknowledged the presence and spirituality of Aboriginal peoples in the United Church by revising the church's crest. The crest changes include incorporating the colours often associated with the Aboriginal Medicine Wheel. The Medicine Wheel, which reflects respect for diversity and interdependence, is often represented in the four traditional colours of yellow, red, black, and white, which incorporate important teachings from the four directions, the four stages of life, and the four seasons. The placement of these colours will vary according to the traditions of the nation. The Medicine Wheel teaches us to seek balance in the physical, mental, emotional, and spiritual aspects of the circle of life. The crest changes also include the addition of the Mohawk phrase "Akwe Nia'Tetewá:neren" [aw gway--  nyah day day waw-- nay renh], which means "All my relations."

Technical Considerations for Use

The Communications unit has put together some technical considerations for use of the crest. Please review these, and indicate how you'll be using the Crest when making your request.