Delegates at Indonesian conference eager to hear how The United Church of Canada came to accept, and celebrate, LGBTIQ members. 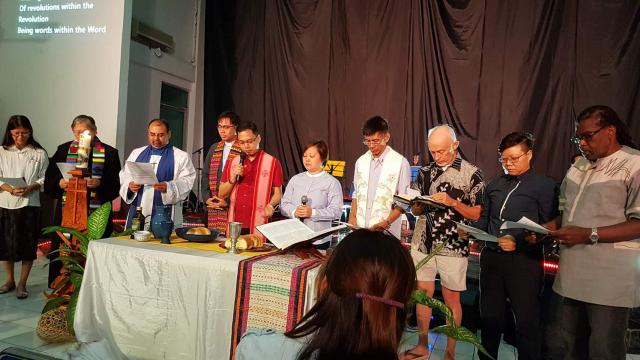 My visit to Jakarta, Indonesia, to take part in the Amplify 16 Conference, has been an eye-opening experience.

On the opening day I offered the morning keynote address at an LGBTIQ (lesbian, gay, bisexual, transgender, intersex and questioning) symposium. It was hosted by the Jakarta Theological Seminary, one of only two LGBT-affirming seminaries in Asia. When seminary principal Stephen Suleeman invited me to the conference, he explained that many Indonesian churches are struggling with LGBTIQ issues. To help them move ahead, Stephen said that he wanted their leaders to hear how The United Church of Canada has dealt with this issue, to the point of electing two gay moderators.

During my morning address to the conference, I spoke about our church’s progress in respect to affirming LGBTQI ‎folks within the church. I recounted the difficulties we went through in 1988, when the 32nd General Council declared that all people, regardless of sexual orientation, are welcome as full members, and could thus be considered for ordered ministry. I told the symposium that despite the bold decision made in '88, it has taken time and effort to get people to accept that we are all God’s children, regardless of sexual orientation.

I also told them about our church’s apologies to Indigenous people. As you will recall, in 1986 we apologized for the church's role in colonization of Indigenous Peoples and territory. Twelve years later, the church apologized for our role in the operation of residential schools. In both cases, we were reminded that as a church, we are capable of being very ethically and theologically wrong, even when we are certain we are being faithful.

The Q & A‎ after my talk went for a full hour, so folks definitely seemed very engaged. I was so happy to share our experiences, and talk about how the United Church is living into that 1988 pledge.

As much as I enjoyed talking to the symposium, the real lessons for me came when other speakers talked about their life experiences. What fascinating discussions! We heard from a pastor from Metropolitan Community Churches in Texas, who described what it is like to read the Bible through queer eyes. We heard from a Christian intersex woman, a Muslim trans man, and a trans woman. They ‎all spoke about their personal experiences with discrimination, and their struggles with self-acceptance. They each talked about both the positive and negative role that their faith and faith communities have played in their journey to healing and wholeness.

We also heard from two academics who addressed issues of pastoral care with transgender and intersex children, adolescents, and seniors, and the importance of developing a truly queer theology and liturgical practice. The day ended with a two-hour worship service that was highly energetic and very thought-provoking. I also preached at the closing ceremony on Sunday, where I gave thanks to God for allowing me to experience this wonderful event.

This experience at the Amplify Conference has‎ been very enlightening. It has helped me to see how important it is for us as a church to stand in solidarity with LGBTIQ folks who do not enjoy the same freedoms, acceptance, and security that we take for granted. I am also struck by the incredible diversity of sexual and gender identities and how each culture has its own way of understanding, naming and expressing these. We have so much to learn from queer folks in other parts of the world. And it is particularly urgent that we listen to these diverse voices and experiences, because Canada is home to people from all over the world. Our ways of talking about and understanding gender and sexual diversity exclude and make invisible the experiences of many people within our church and the wider society.

I have also had the great privilege of getting to know a beautiful intersex person named Small Luk, from Hong Kong. She has taught me so much about the gifts and challenges of being intersex. This is something about which I have been quite ignorant. I am grateful to have my mind opened. And I look forward to fulfilling my promise to Small that I will help raise awareness of intersex people and make our churches places of safety and welcome for them.

We are now being hosted by the Student Christian Movement of Indonesia, as well as visiting with interfaith groups and members of the ecumenical Communion of Churches in Indonesia. What a great opportunity to learn how people half the world away from Canada embrace and celebrate their faith.

Jordan Cantwell is the Moderator of the The United Church of Canada, and is in Jakarta with her daughter, Hope, and the Rev. Michael Blair, Executive Minister for the Church in Mission unit of the United Church. You can find more photos from their visit to Indonesia on the United Church Facebook page.