Making Peace in the Midst of Conflict

The Rev. Dr. Hyuk Cho shares about the history and consequences of the war on Korea peninsula which has yet to come to an end after 70 years 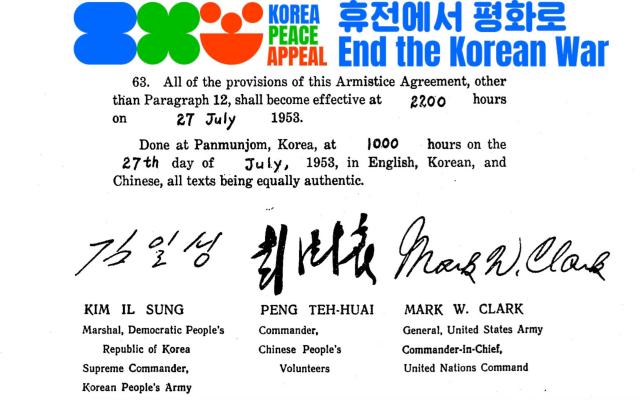 Recently I have received questions related to North Korea’s missile development and the signature campaign to end the Korean War promoted by The United Church of Canada.

The questions are about the reason for the development of North Korea’s (The Democratic People's Republic of Korea) ballistic missiles, and my family’s safety in South Korea (The Republic of Korea) in such an event. To those who have asked questions or expressed concern about the perceived threat of conflict, I have tried to explain, but it is very difficult to do so in a short conversation given the complicated history. So, I offer a brief history of Korea, and from that context, search for new insight not only into the conflict on the Korean peninsula, but also other conflicts in our world.

A few months ago I went hiking from my home in Vancouver, BC. From the trail, I was able to see the horizon clearly where the ridge of the hill on the other side meets the sky. I found myself gazing at the ridge for a long time as if I was looking for something there, perhaps searching for a moving object. I was surprised when I realized that I knew what I was looking for – a reminiscence from my school days in (South) Korea.

When I was in public school, we had classes on making posters and writing anti-North Korea propaganda, including tips on how to recognize a spy from North Korea. One of the tips was to gaze carefully at the mountains to see if there was any moving object which might be a spy sneaking into South Korea. This lesson was so embedded in my head that when I looked across at the ridge, I instinctively looked for someone who might be a spy. I realize how dangerous memory can be – I am still looking for a spy here in North America. In this reflection I am using theologian Johann Baptist Metz’s term, “dangerous memory,” in that “memory” can be a subversive power to resist the powerful.

I have to confess that I didn’t know much about the Korean War until I read Bruce Cumings’ The Origins of the Korean War, Vol. 1 & 2 (1981). During the war, North Korean cities were severely destroyed by the Allied United Nations forces, under the command of the United States. Seventy-five percent of Pyongyang, the capital city of North Korea, was destroyed by bombing. The bombs released by the U.S. Air Force totalled 635,000 tons, more than the 500,000 tons of bombs dropped during the Second World War in the entire Pacific war zone. The people of North Korea hold “dangerous memories” of the war and the rebuilding of their country from the ashes.

To gain some insight into the current conflict, we need to go back to the 1953 Armistice Agreement when the Korean War was temporarily halted. The seeds for nuclear-armed North Korea were planted by actions of the United States that contravened the Armistice Agreement. “Beginning in 1957, the US violated a key provision of the Agreement (paragraph 13d), which barred the introduction of more destructive armaments to the Korean peninsula, by ultimately deploying thousands of tactical nuclear weapons in South Korea including 20 kiloton ‘back-pack’ nukes” (Robert Alvarez, “Korea: End the 67-Year War,” December 2, 2017, Common Dreams).

Since South Korea was armed with tactical nukes by the United States, North Korea armed itself with nuclear weapons for its survival and security. Every year the United States and South Korea practise “war games” – an extremely provocative act in the face of North Korea. These exercises include the U.S. Air Force, Navy, and Marines and often involve US Forces most powerful warplanes, stealth F-35 Lightning II fighters and B1-B Lancer bombers.

A few years ago, when there was a crisis in the Korean peninsula, I telephoned my sister in South Korea to see how she was feeling when many people were talking about a possible war. She said not many people were concerned about the possibility of war, and seemed relatively calm. Were they indifferent? Why were North Americans so concerned?

In my view, there is no reason North Korea’s leader, Kim Jong-un wants to start a war. Why? He and his people hold on to the dangerous memory that they built their country thus far from ruins. They know they will lose in another war. They want to secure their country from the U.S. threat. They know that only the U.S. has the authority to make military decisions on the peninsula including command over South Korean forces. North Korea is playing a very dangerous game against the United States when it tests ballistic missiles that can reach the US mainland; North Korea develops them for its own security, to protect itself from the United States and perhaps from South Korea but its missile tests are seen as an aggressive action.

The Korean War was a proxy war between superpowers. If war breaks out again it will continue to be a proxy for geopolitical conflict beyond the Korean Peninsula. Neither North Korea nor South Korea want another war. All Korean people share a dangerous memory of war. Former South Korean President Jae-in Moon declared in 2017, “We cannot allow a pre-emptive war led by the United States. We have made it clear to the United States that there can be no military action on the peninsula without our consent.” Where on earth does an independent country not have the right of military action in its own land? South Korea lives still under the US. military occupation in this regard.

In this context, the two Korean leaders from North and South Korea, Kim Jong-un and Moon Jae-in adopted the Panmunjom Declaration for Peace, Prosperity and Reunification of the Korean Peninsula on April 27, 2018. According to the declaration, both governments agreed to cooperate on officially ending the Korean War and the Korean conflict, beginning a new era of peace and sharing commitments to end divisions and confrontation by approaching a new era of national reconciliation, peace, reunification and prosperity and improvements to inter-Korean communication and relations.

I hope the Panmunjom Declaration improves inter-Korean ties, reduces military tensions and increases dialogue between North and South.  When destruction of the other seems the motivation, however, the movement toward peace seems impossible. When two sides want to find a peaceful resolution, there must be reciprocal good faith. When it comes to the Korean peninsula conflict, all parties – North Korea, South Korea, the United States and China and surrounding countries must put humanity first.