Sharing Our Stories, Claiming Our Names

Kim Uyede-Kai writes from the Asian Ecumenical Women’s Assembly, a “herstorical” assembly where women could hear one another’s stories be given voice, some for the first time. 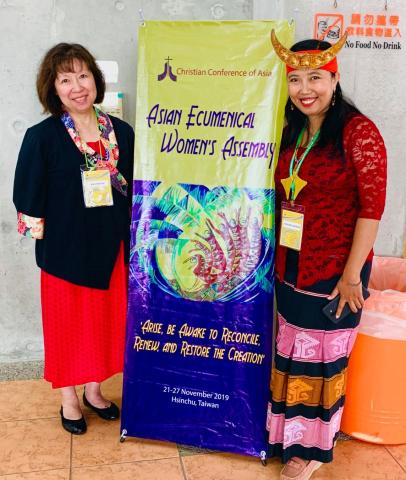 “What country are you from? Indonesia? Korea? Taiwan?” “No, Canada.” “But your face looks like…!”

What does Canada look like to other countries when the Canadian in front of them has an Asian face and speaks with a born-in-Canada accent? And where did the assumption come from that Canadians don’t look Asian?

I represented The United Church of Canada at the Asian Ecumenical Women’s Assembly in Hsinchu, Taiwan. As a partner of the Christian Conference of Asia (CCA), I was introduced in the roll call not by my country of origin but as representing The United Church of Canada as a CCA partner. It was over the course of the week’s meal conversations, walks to and from the meeting venue, and workshops that the country of origin questions arose.

My family has been in Canada since 1900. I know that Canada also looks like me. I’m third generation United Church. I know that The United Church of Canada also looks like me. But I already knew that in 1998 when I journeyed with an intentionally diverse Toronto Conference women’s delegation to South Africa and Kenya to model the diversity of Canadian women and the United Church. I also know that at any given time in the church I am still expected to explain, unlike White women, where I “really” came from.

This Asian ecumenical gathering was different. With delegates from 48 countries, there were many women like me with skin colours, accents, and faces that did not appear to match the country they represented: an Australian delegate originally from South Sudan; Malaysian-born delegates with Indian ancestry; an Indian delegate with Mongolian tribe ancestry; an Indonesian delegate with Chinese ancestry, New Zealand delegates with Tongan heritage. We all knew the misidentification that comes with assumptions about a country’s identity based on media portrayals and outdated school books. At this assembly, we could name and claim our multiple identities without apology.

The only time I felt conflicted about my Canadian identities was when we were invited to wear our traditional dress for the opening worship. The dreaded cultural dress invitation. Canada does not have a traditional dress and I do not have a kimono. All I had was a modern Japanese Canadian-made, kimono fabric-trimmed top. And my Toronto Blue Jays jersey to wear under it. A combination of outside and inside cultures was the best I could do. Yet, both together represent where I come from and where I settled. What really mattered was what lay beneath the beautiful clothing: hearts beating with grief and burdened with stories of objectification and hopelessness.

Many of the women at the assembly shared hard, heartbreaking stories of trauma, exploitation, and violence against women and girls in their countries. Rev. Ester Damaris Wolla Wunga from Sumba, Indonesia, shared the work she did with sex trafficked girls, and girls exploited into child marriages and migrant work. Sumba is a land of great beauty and of great poverty, desperation, and exploitation, especially of girls and women. For Ester, “What country are you from?” is all these things. That such a beautiful land can hold such terrible abuse of girls and women in grinding poverty and oppression is not God’s desire. Indigenous presenters from Taiwan and Indonesia, a Maori delegate from New Zealand, all shared their struggle for dignity, for statehood, for a place of worth, for protection of their women from violence of all kinds. Pakistani delegates told of women beaten and killed by male family members in the name of (male) family honour, of the common rapes of very young girls, babies really. Many women told stories of barriers to ordination and positions of decision-making, of challenging patriarchy, and that if they were advocate for women’s rights in their own countries they would suffer the fate of other outspoken women, i.e. they would be taken from their beds at night, never to be found.

Despite delegates from country after country sharing similar and worse stories, there was sacredness in the awakening, in the telling, and in the listening.

Hsinchu, the name of the chosen city of the assembly, means “new bamboo shoots.” Bamboo shoots grow very quickly underground in colonies before they appear above ground, very much like the stories shared by the delegates. Each story teller represented communities whose stories were still underground and were being brought to light one by one.

This gathering was the first ecumenical and non-church gathering of Asian women in the 65-year history of the Christian Conference of Asia. An herstorical assembly where women could hear one another’s stories be given voice, some for the first time, and come together in strength and witness to renew, reconcile, and restore in creation. We hope it won’t be the last such assembly for there is much to be done together that we cannot do alone.

I am from Canada, a country where women’s human rights are protected, and I am a fourth generation settler whose ancestors came from 1900 Japan to K’omoks and unceded Coast Salish territory of the Saanich, Esquimalt, and Songhees Nations. A country where we are still undoing patriarchy, sexism, misogyny, and colonization. “What country are you from?” “And where did you settle?”

—Kim Uyede-Kai is Minister, Right Relations and Indigenous Justice serving the three south and  southwestern Ontario Regional Councils of Antler River Watershed, Horseshoe Falls, and Western Ontario Waterways. She lives in Toronto, traditional territory of the Haudenosaunee, Huron-Wendat, and Mississaugas of the New Credit First Nation, and Upper Canada and Dish with One Spoon treaties. She represented The United Church of Canada at the Christian Conference of Asia Asian Ecumenical Women’s Assembly in Hsinchu, Taiwan, November 21-27, 2019.

Does this blog pique your interest to participate in people-to-people opportunities with global partners? We invite you to find out more at the People in Partnership webpage or by emailing us.