Two young Indigenous women speak about the situation of Indigenous Peoples in Canada and Australia as part of the Moderator's Dialogue on Reconciliation. 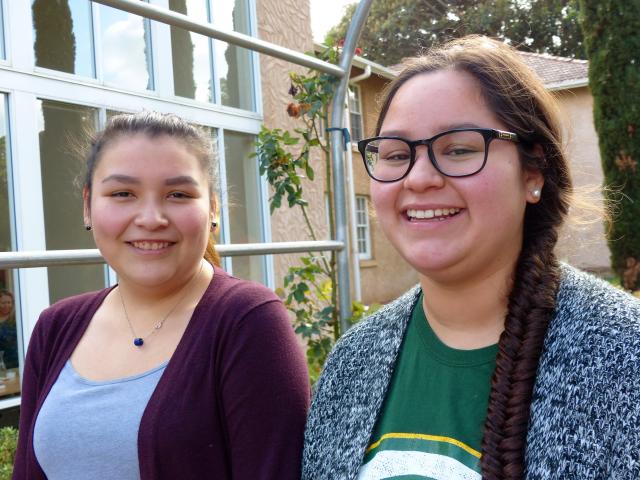 On Tuesday, March 14, (Day 2) of the Dialogue on Reconciliation with the Uniting Church in Australia after a day of meetings with the National Centre of Indigenous Excellence and the Uniting Church of Australia Assembly Standing Committee Office of the National Assembly I had the pleasure of listening to Nicky McKay (Berens River, MB) and Samantha (Sam) Miller (Six Nations of the Grand River, ON) as they reflected on the day’s events. The following summarizes their conversation.

The Indigenous crisis in Australia and Canada is not so different. Nicky and Sam commented on how easy it was to connect and understand to the issues facing the people on this land. As an example, they mentioned how in Australia’s recent history Aboriginal Peoples were not recognized as human beings and came under the "Flora and Fauna Act." They drew the connection to Canada’s history of referring to Indigenous Peoples as savages and denying them the same rights and freedoms as other citizens. Nicky and Sam articulated their anger at these notions.

As I listened I heard clarity in these young Indigenous women’s intention to teach others about Indigenous Peoples knowledge, practices, wisdom, and culture. They understand how people will make up their own minds about the issues facing Indigenous Peoples and the pathway to justice and healing, yet the work of education in both Indigenous and non-Indigenous communities is critical and must be carried out.

Nicky and Sam spoke at length about their concern for their peers and how they struggle with identity. Too many youth and young adults do not have opportunity to learn their language and culture. They spoke at length how learning their history and culture has enriched their own lives. They express frustration in the Canadian school system that continues to teach from a false history. Sam asserts that what is needed is the sharing of stories, “Like we did today!” She adds that Elder storytellers have the ability to deepen understanding, so they need to be in the classroom.

Through their lived experiences, Sam and Nicky do not believe that Indigenous students’ needs are acknowledged within the schools. A story was shared of a time where some students at Sam’s high school held a smudging ceremony in honour of person who had recently passed. A group of non-Indigenous students approached the group and threw food at those gathered. There was huge disappointment amongst the Indigenous students that there was never any accountability for this carried out. Sam spoke too of her involvement in sports activities, “I was racialized and sexualized. I have been called Pocahontas. The coaches do nothing. They tell me to deal with it! And, when I do stand up for myself, I am not supported.”

Nicky connected to a story that speaks to a time where she too feels an absence of encouragement. Nicky moved off her reserve to Winnipeg to seek opportunities for her life. When she returned she did not feel welcomed back. She felt as though her growth and success where not acknowledged and celebrated by the community. Nicky expresses a sense of living in between two worlds and belonging to neither. Yet, she remains strong in her commitment, “I still chose to fight for my people. I want our situation to be better and will not give up on my community. I cannot stay the same. So, I’ll continue to educate myself.”

Both Nicky and Sam named experiences of criticism that can arise when choosing to be involved in church programs. Both have been questioned why they would they want to involve themselves in the church in light of the history of the church’s mission to Indigenous Peoples in Canada. Despite this common dynamic within Indigenous communities, they are committed to attending to their need to connect to conversations and events that provide safe space to learn and speak to issues that impact their lives.

I asked them what is the message they would like those at home in Canada to hear. This was their response:

The issues facing Indigenous Peoples are similar wherever you go. We need to engage ourselves in conversations like this one in Australia.

Change is possible. It will come through sharing stories. Sam and Nicky offer this advice to those who chose this path:

—Maggie Dieter (McLeod), Executive Minister of Aboriginal Ministries and Justice, and delegation member with the Moderator's Dialogue on Reconciliation with the Uniting Church in Australia. For more perspectives from the Dialogue on Reconciliaiton, see "At the Intersection of Gospel and Culture" and our photo album.