Marking the Journey from Apology towards Reconciliation

Recommitting to the Apology to First Nations Peoples, 30 years later 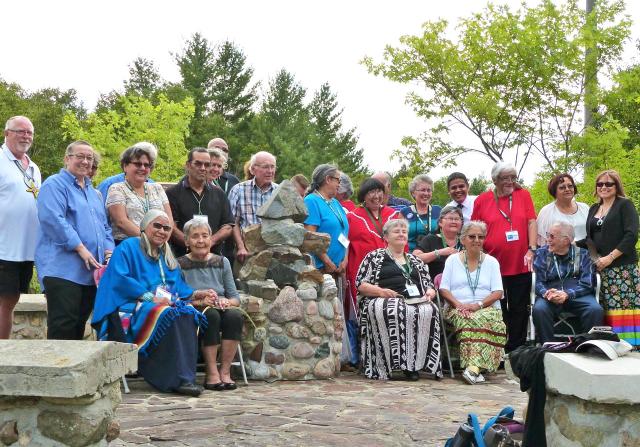 “When you do something, someone will come behind you.” Alberta Billy, who asked the United Church for an apology 30 years ago, said that. She and many others trusted that it would be so, and we have been blessed through their courage and trust.

Alberta Billy, other Elders, and people who had been present in 1986, when an apology to First Nations Peoples was extended, gathered at the cairn in Sudbury on August 20, 2016, to remember and recommit to the “walk together.” They were joined by children and grandchildren of those who had been present then, and others who had taken up the late Elder Art Solomon’s challenge to “get real or get lost.”

The Very Rev. Bob Smith reiterated how he had spent his life since delivering the apology trying to “make an honest man” of himself, and how the church’s course had been forever changed.

I first encountered this sacred site at the edge of a parking lot at Huntington University during my first week on the job as General Council Liaison Minister for Residential Schools, attending a National Aboriginal Consultation in July 2005. Elders had brought stones to add them to the intentionally unfinished cairn. The ceremony symbolized that some significant steps had been taken to live out the apology. Today, I am very aware that we still have a long distance to go.

At the 2016 gathering, Elder Art Petahtegoose delivered several teachings around lighting the sacred fire and at the welcoming. In a plea to love, forgive, and be kind to one another, he related that his mother had said to him as a child, "I cannot teach you if I hate them” (referring to miners and others who had injured her and her community). Pukwiss Johnson and Rhonda Taylor, daughters of Gladys Taylor (Curve Lake), emphasized how an apology is only words unless it comes from the heart and is followed up by actions.

Edith Memnook (Goodfish Lake) had delivered the All Native Circle Conference response to the apology in 1988. Her daughter, Janet Hunter, and granddaughter, Shirley Hunter, now told how Edith always came from a place of love, no judgment, and seeking unity, encouraging us to "invite the good things to our fire." Maggie McLeod, Executive Minister for Aboriginal Ministries and Indigenous Justice, asked, "What story will we create going forward? How will we build now?"

Rodney Smith-Merkley, adopted into the Heiltsuk First Nation (the ancestral home of the late Alvin Dixon, who had chaired the Committee on Indigenous Justice and Residential Schools for nine years), had just returned from Bella Bella, BC. He had brought an eagle fan that they wished to present to the United Church on this occasion. Moderator Jordan Cantwell, who had been emcee for the event, accepted the fan, and pointed out that Indigenous Peoples continue to be leaders in bridging the gap, reaching out in grace and forgiveness.

The following day, preaching on 2 Corinthians 5:16–20, which speaks of God giving us the ministry of reconciliation, Moderator Cantwell noted that although it is God who has been abandoned and rejected, it is God through Jesus who initiates the healing of relationships and invites us to liberty. We are called to carry on the healing, making all things new.

To see more photos from the event, see the album on Indigenous Justice and Residential Justice Facebook page.

See these webpages to learn more about Reconciliation and Indigenous Justice in the United Church, and about the role of Aboriginal Ministries in the life of the church.