Learning from the Land

At Banff Teaching House, Indigenous Elders and others are renewing and expanding perspectives through land-based learning. 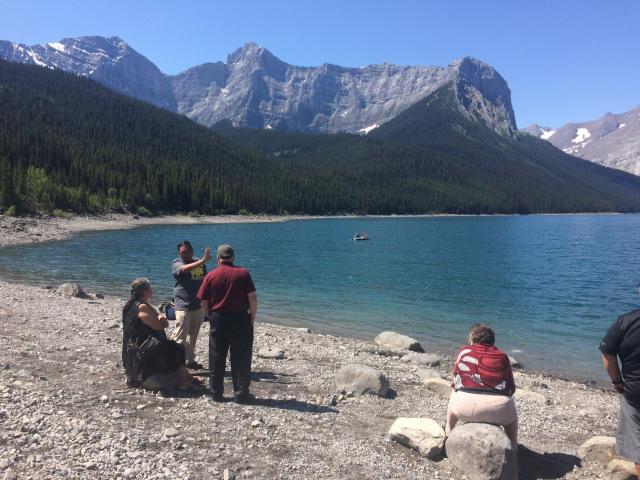 Like many people who have been fascinated by humankind’s exploration of space, my summer reading in 2019 encompassed a fair number of stories marking the 50th anniversary of the Apollo 11 mission to the moon. These included reflections from a number of astronauts who have travelled beyond Earth’s atmosphere since that time. In a two-page spread that appeared in the Toronto Star, several of these travellers spoke independently about what it was like to view Earth from space. They commented on how different the continents look from the way they appear on typical maps of the world. From space, boundaries disappear. One sees deserts, forests, grasslands, and highly populated areas differently when the national and international lines we call “borders” are not drawn on the planet. A unified and unifying sense of home and community arises.

Perspectives on land, and our place on the land, also came to the fore in July 2019 at the Banff Teaching House. This four-day event in Banff National Park and Morley, Alberta, sought to rebirth the North American Indian Ecumenical Conferences that took place in the same area from 1971 to 1985. The host of the original conferences was the Rev. Chief John Snow, Sr. His children—John, Tony, and Bill—are working hard to build on their father’s legacy and revitalize the goals of the original conference. The vision was to break the denominational boundaries that exist among Indigenous peoples and bring them together. The conferences were also designed to bring traditional Indigenous knowledge keepers and Elders from a variety of backgrounds to one place so participants could learn about traditional Indigenous teachings and explore them in relationship to Christian theology and practice in a traditional way—on the land. Today we would call this land-based learning.

In the stunning setting of Upper Kananaskis Lake, Bill Snow spoke to us about a painful reality of Canadian history. He described how the Stoney people were prevented from accessing their spiritually important places, like Upper Kananaskis Lake, due to prohibitive policies like the Pass and Permit System instituted by the Canadian government in 1885. These policies were amended out of the Indian Act in 1951, but their legacy of disconnecting Indigenous people from their traditional lands has had a lasting impact. The importance of going to these places was not just to trap fish and hunt but also for spiritual purposes. The mountains, lakes, wildlife, and vegetation also contributed to the well-being of the Stoney people. During the visit to Upper Kananaskis Lake, we were able to experience firsthand the beauty, peacefulness, and tranquillity of this place and other places in the Bow Valley. These sacred places are a source of strength, kindness, and patience for the Stoney people as well as visitors.

In his book These Mountains are Our Sacred Places, Chief John Snow explains how the Stoney revere nature as nature reveals religious truth. Bill told us we should take time to simply experience the surroundings and consider what the experience was teaching us. It took no imagination at all amid such incredible beauty to offer prayer and express thanksgiving for life and for the gift of creation. The presence of the transcendent was obvious.

John and Tony—both student ministers studying at Sandy-Saulteaux Spiritual Centre and Vancouver School of Theology (VST)—led other teaching sessions and talking circles in Banff and Morley, home of the Stoney people. It was good to conclude the gathering with a pipe ceremony in a tent on prairie grass amid wildflowers and in the presence of a number of young people from the community. The youth had taken part in programming arranged by the McDougall Stoney Mission Society. The Society is working to restore the historically significant McDougall Memorial United Church at Morley and, through programs, to strengthen relationships between non-Indigenous people and the Indigenous community.

With a commitment of support from Vancouver School of Theology, John, Tony, and Bill Snow plan to hold another Banff Teaching House next year to further ecumenical relations among Christians and others who are interested in learning from Indigenous spiritual teachings and practices, and to learn about how Indigenous peoples across all denominations are shaping the church today. Theological understandings of the land and creation will remain at the heart of this work and in the hearts of participants.

—Lori Ransom is Reconciliation and Indigenous Justice Animator at the General Council Office.