Just Because I’m a Minister, Does That Mean I Shouldn’t Swear?

Dan Benson writes that, "like all those stereotypes of ministers’ work, none is so sticky as the stereotype that the minister mustn’t swear. Heaven forbid!" 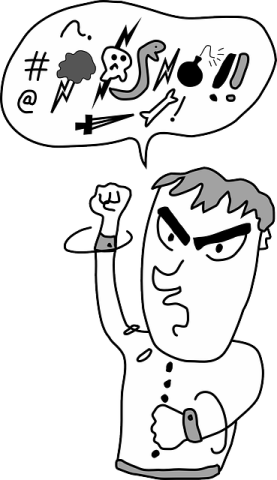 Hammer and thumb: a classic, if unhappy encounter. One that calls for suitable language.

The fence between my neighbour and I had fallen into a pretty sad state. And since I had built the last one more than 20 years ago (and prefer my own imperfect handiwork over someone else’s), I was happy to take on the task of rebuilding. Until, that is, my hammer connected with my thumb. Twice. The air quickly turned blue. Twice.

But my swearing seemed to attract some unwanted and unnecessary attention. I’ll readily confess to being a fairly competent swearer with an extensive vocabulary. Having grown up with a father who worked in heavy industry where men competed for the best turn of phrase, and a mother from Newfoundland (a people well-known for colourful language), I have a wealth of images, expressions and words suitable for all occasions. Apparently, however, my lineage is not perfectly pure; I had a great uncle who, losing a thumb in a farming accident years ago, looked at the bleeding stump where the thumb should have been, and uttered, “Pshaw, precious little thumb left.” Even though I still had my complete thumb, my reaction was, to put it mildly, a tad stronger. Just a tad, but enough to turn the head of my neighbour with a look of surprise verging on shock.

“Dan, did you just say what I think you said? I can’t believe it. And you a minister!” Her disappointment hung in the air like Monday’s laundry.

Yes, guilty as charged. I’m a minister in a church – the going-to-church-every-Sunday-and-preaching-the-Gospel kind of minister. And despite all the seminary training, years in the pulpit, endless hours sipping tea with little old ladies, men’s breakfasts, basketball with teens, sitting with grieving families and celebrating joyous weddings, I confess I still haven’t shaken my ability to swear with the best of ’em. And like all those stereotypes of ministers’ work, none is so sticky as the stereotype that the minister mustn’t swear. Heaven forbid!

But even stickier, perhaps, is the perception that one shouldn’t swear in front of the minister. Early in my career as a new minister a parishioner took me out to lunch; we went in his car to a local pub (nothing stronger than soda). On the way back to the church, we nearly got T-boned when a speeding car ran the red light. My friend dropped the f-bomb (I said something very similar but under my breath, still not knowing him too well). Then he immediately turned to me red-faced and said, “I’m so sorry, Reverend!” Now it seems to me his outburst was not only justified, but sadly understated. I mumbled something akin to “Don’t worry about it, completely understandable, blah, blah, blah.” And we proceeded back to the church in awkward silence.

I’ve lost count of the number of times someone has used a fairly mild expletive in my presence at the church and then quickly turned and apologized to me as if they’ve thrown the brown stuff at me literally instead of merely using the s-word in a ho-hum way. I’m more comfortable with my parishioners now and laugh it off saying, “Don’t worry about it – I’ve been known to say it myself.” It’s tempting at times, though, to reach into my Dad’s bag o’ tricks – the phrases reserved for when knuckles get scraped and bruised while replacing shock absorbers in an unheated garage in February – just to get a reaction. And to show them how it’s done properly.

The most curious thing about this swearing-with-the-minister thing (not to be confused with cursing, which is another subject entirely), is the effect on my friends and family. I came to ministry as a second (or was it third?) career, so most of my friends have known me long before I got the collar, and, of course, my siblings forever. Their reactions fall into two types: the first is the swear word that slips out and the subsequent embarrassment and apology, much like my parishioners; the second is the (very tired) joke when I enter a room that everybody needs to watch their language now that the parson has shown up. Amazing how they want to straighten up and fly right when I’m around – even the ones who are atheists. I wonder, is that a good thing?
Recently I met with a family who had lost their beloved young son in a car accident. What could I say, or was there even anything to be said in the midst of such tragedy and grief? Silence is so much better than the shallow platitudes that get rehashed at times like this. After some uncomfortable minutes words did come and almost spontaneously and without thinking I said, “This is one of the shittiest things imaginable.” Now, I don’t know if it was exactly what they were thinking, the astonishment of hearing such words from a man of the cloth, or the blatant accuracy of my statement, but I do know they were exactly the right words. Instantly, I was no longer “the minister” but their minister (notably without the quote marks): I was there to be with them, share their grief, laugh and cry with them, support them in getting through all the crap we have to do when someone dies, and encourage them as they adapt to the new normal.
As a minister and a lover of language, I am in awe of the bewildering power of our words. I’m perplexed at how the same word or phrase can be an insult or a handshake of solidarity; it can open doors or lock them shut; it can bring us closer to God or send us to the depths of despair. Whether four or 14 letters, our words matter; choose them wisely.

—Dan Benson is minister at St. Paul's United Church in Scarborough, ON. Originally published in the Globe and Mail, "First Person" column, April 2019. All rights reserved by the author.