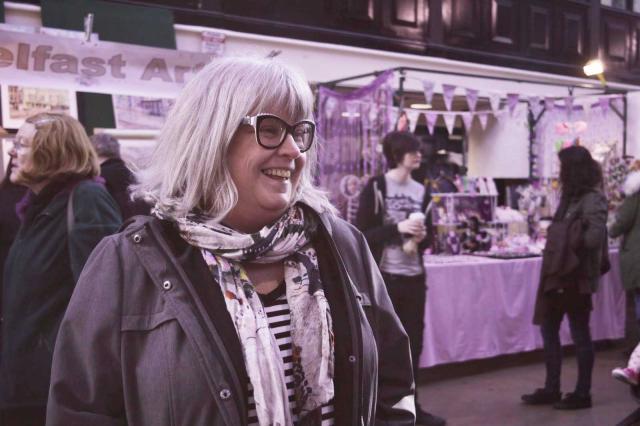 Martha Martin, the author of the new United Church Lenten book, Parables, Prayers, & Promises: Daily Devotions on Jesus. She was interviewed by the Tilman Lewis, an Editor/Resource Coordinator at the General Council Office.

What drew you to write so personally about Jesus?

To be honest, it had never really crossed my mind to write 40-something short reflections about Jesus—until I was asked to do it for this project! But then I became intrigued, and the challenge kind of hooked me. My style in ministry is usually to bring it back to a personal story—whether I am leading a Bible study or preaching.

I had started a blog when I first went to Corrymeela, the peace and reconciliation community in Northern Ireland, and then continued to write every time I went back. It was very personal, about some of the things I was experiencing and learning. I always got very good feedback from people about it, so I felt that it was kind of a template for how I should proceed with the book. In fact, some of my blog entries from the past six years formed the basis of some of the reflections.

You return again and again to your experience of the Corrymeela community. Why was that so formative?

My first three months in Corrymeela while on sabbatical in the summer of 2011 was personally transformational. It was such a gift to be part of this incredible community, where I met people from all over the world, and began to learn about the work of peace and reconciliation in Northern Ireland.

It was something I had never done before—just leave my life and responsibilities behind. Well, that’s not exactly true. I did it when I was 21 and went to the UK and Europe for eight months with some friends. But not since then. It took me a while to settle in, to get into the rhythm of the routines, the tasks, the daily worship. I met some wonderful people there, both members of the Corrymeela community from Northern Ireland, and others from all over the world.

When I left Corrymeela after three months, it was my hope that I would bring groups back to have a taste of what I had experienced. I was working as the United Church Chaplain at Dalhousie at the time, and had a wonderfully supportive campus ministry committee who encouraged me to take a student group. I also had close ties with Tatamagouche Centre, who also wanted to take a group to Corrymeela. In the past five years, seven groups and over 60 people have travelled to Corrymeela with me. Every time I go is different, and every time I go I learn something new—about myself, about Northern Ireland, and about peace and reconciliation.

Each reflection gives links to songs and videos. Can you highlight a couple that particularly move you?

I first heard Gavin Byers’ recording “Jesus’ Blood Never Failed Me Yet” (Day 16) during my training in spiritual direction. At first I just thought it was weird. But it had a strange pull. When I got home and talked to my spouse, who is a recording engineer, about it, he told me how incredible the actual process of making that recording would have been back then—that the actual tape on the loop would go out the door and down the street, or something like that! I didn’t really understand it, but the more I listened to it, the more compelling it became to me. I had forgotten about it for years, but when I went looking for ideas in my notes from my training, there it was.

I was introduced to the Rend Collective (Day 5) by a student I taught in an online course for the Atlantic School of Theology Diploma in Youth Ministry. I am usually a bit cautious about some of the newer “praise band” music, and I have to confess to not listening to a lot of this band’s music. But I really like the video—or most of it, anyway. I get a bit squirmy towards the end with some of the God language and theology of sacrifice. But in the first part of the video, I love some of the things that he says about what a family of faith is all about. And I am trying to be more open to those with different ways of thinking than mine. I struggled with including it, but then I thought that it would speak to some folks, and I had to be open to that.

Some of the popular links are humorous or ironic. Why did you include those?

I have a collection of videos, stories, links to art work, and pieces of poetry that I have used over the years, and I am always on the lookout for more. Parker Palmer, writer and speaker, calls these “third things,” in that it is something that brings people to a deeper meaning in a way that is inviting and safe.

I think laughter is also a “third thing.” Sometimes a good laugh relaxes people. Sometimes it throws them off guard for a hard truth that is to come. I love the laughing baby video (Day 7). I could watch that all day—just a baby laughing so hard until he or she falls over. It releases something in me.

I am a huge movie fan. Especially animated movies. This past year, there were three amazing animated movies—Zootopia, Finding Dory, and Kubo and the Two Strings. A good animated movie always works at different levels so there is something for all ages. I’m always looking for ways to include a movie clip in my sermon or children’s story. Again, I think it offers us a way in to think about some important issues. You just have to look at Ellen’s recent takedown of Trump’s travel ban to see how to do it well.

Trish Elliott's study guide offers opportunities to delve in deeper, and share and live out your faith. What do you think it adds to the book?

I was very appreciative that Trish agreed to do the study guide. I admire her work in The United Church Observer. In the study guide, I liked her balance between offering folks the chance to check in about a particular reflection that spoke to them, and her directed questions about one specific reflection. I also liked that she included a variety of activities, including songs, scripture, and a spiritual practice.

Having another writer do the study guide adds another voice to the book, and I think it makes it more user friendly if you want to use the book for a study group. It was interesting to see where she focused her reflections, and to imagine how that will play out in a group study.

Have you had any feedback on the book yet? What are people saying to you?

I have received positive feedback from a few folks who have read the book ahead of Lent already. The positive feedback is great, but my hope is that this resource will help people both deepen their faith and talk about their faith—and even about Jesus! I hope that it might invite others to reflect on their own lives in the same way that I have reflected on mine.

I realized, only since the book came out, how deeply personal it is. That feels a bit scary to me—putting myself out there, being vulnerable. But the positive feedback has helped me “own the project,” I guess. I’m still having a hard time promoting it….