Windsor churches commemorate their connection to rum-running and the Underground Railroad. 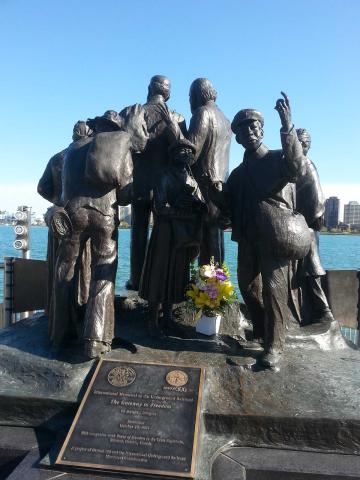 Flowers from the United Church of Canada were placed at the Gateway to Freedom International Memorial in Detroit by United Church of Christ members, after the joint event in Windsor, Ontario.
Credit: Rev. George Bozanich
Published On: May 19, 2017

Two important periods of our continental history — Prohibition and slavery — were marked on April 22 in Windsor, Ontario, in an event attended by United Church of Canada members, along with 15 people from the United Church of Christ.

The Essex Presbytery of The United Church of Canada organized the gathering, in conjunction with the Detroit Metropolitan Association branch of the United Church of Christ. The Rev. Ann Corbet, who leads the Woodslee Pastoral Charge, said approximately 60 people gathered at Bedford United Church in Windsor, to hear about its connection to the illegal rum-running that went on during Prohibition in the United States, which lasted from 1920 to 1933.

Built in 1906 on the Detroit River, Bedford United started as Sandwich Methodist Church. From 1918 to 1921, the congregation was led by the Rev. J.O.L. Spracklin. According to Methodist church records, Spracklin “was noted for the eloquence of his rhetorical style.” He was also known as a firm supporter of Prohibition, and he was given special permission by the province to carry a gun to crackdown on those trying to illegally sell or produce alcohol.

“He was very aggressive in carrying out these laws,” Corbet says. “He even wore his gun in the pulpit.”

On Halloween night, 1920, someone sprayed the manse with gunfire when Spracklin’s wife was home. She was not injured, but he was incensed, and he went out and shot and killed Beverly “Babe” Trumble, the proprietor of a local hotel and drinking establishment. Spracklin was charged with manslaughter, but not convicted, and he left the church the next year.

Modern-day “rum-runner” tours in Windsor stop at Bedford United. At the church, tourists are met by a Temperance Lady, who tells them the about the history of Sandwich Methodist and its connection to Prohibition, before they are brought inside to hear “Reverend Spracklin give them a hellfire and brimstone sermon.”

During the special event on April 22, the group witnessed the rum-runners performance, then travelled to Sandwich First Baptist Church, an important stop on the Underground Railroad. Built as a log cabin in 1820, the church was rebuilt by free and fugitive slaves in 1841, with each family suppling a number of homemade colour coded bricks, some of which still exist.

After the passing of the U.S. Fugitive Slave Act in 1850 — which gave owners the right to capture runaway slaves and return them to the American South —many runaway slaves fled to Canada. Hundreds crossed the Detroit River into Windsor, and Sandwich First Baptist Church was their first stop.

They got to the church through tunnels originating at the river’s edge, which ended inside the sanctuary (the trap doors in the flooring are still visible). If U.S. slave hunters tried to enter the church during a service, the pastor would warn the congregation by leading in the singing of predetermined hymns such as Nobody Knows the Trouble I’ve Seen or I’ll Fly Away to Glory. The runaway slaves could then escape down the trap doors in the church floor to avoid detection.

Corbet said this is the second joint event the Essex Presbytery has held in conjunction with the Detroit branch of the United Church of Christ. There is talk of having other cross-border celebrations in the future, she says, as part of the two denominations’ full communion agreement.