Forgiveness as a Way of Life

The Rev. Marie-Claude Manga reflects on her ministry and work as an ordained Black woman with The United Church of Canada 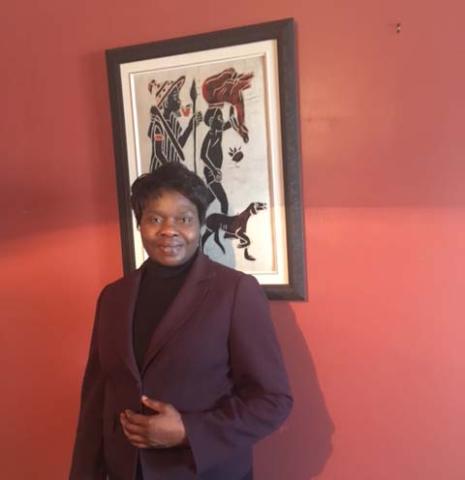 This blog post is part of our series for Black History Month 2021.

I grew up in a family of eight: four boys and four girls. I am the second among the siblings and the eldest daughter. My father has always encouraged the education of his children, boys and girls, giving them an equal chance. To encourage me in my education, he kept telling me I was a whole person and that nothing and no one had the power to stop me in my momentum. Any occasion was propitious for my parents to expose me to different challenges. Dad would call me to let me listen to a female voice on the radio and tell me I could also accomplish great things such as becoming a female journalist.

Baptized by my grandfather, who was a Baptist pastor, my parents did not hesitate to send me to a boarding school run by Catholic nuns to acquire a “good” education. At the Catholic school, I was required to be baptized a second time. It did not shock my parents who encouraged me because, for them, God had no preference for one religion over another.

It is with those values that I found myself in Canada with my four-year-old daughter to continue my education in social work. I was working as a social worker when I was called to serve God. After that, the challenges came one after the other.

I remember the challenges and situations that I faced in my ministry as a Black woman and French-speaking pastor in an Anglophone majority and rural context that I have never known previously. I remember the day I introduced myself to the board of a church. The first question was, “What are you doing here?” As I was answering with my limited English, one of the board members looked at me with disdain and said loudly, without restraint, “I do not know what we have done to God to deserve this!”

I remember the evening when I went to the bedside of a parishioner. Lying on his bed, the man was following the World Vision show. I entered the room and said hello. As an answer, he raised the volume to draw my attention to the screen. After several minutes, he said, “What are you doing here? Do you visit me because of my money?”

I said, “No, I’m not interested in your money. I am here as your pastor. Actually, I have been appointed as the pastor of the church you belong to.” He looked at me and laughed. His wife was shocked and embarrassed, but I stopped her from intervening. In the evening, she called me to apologize. I took time to listen as I wanted to reassure her.

The Sunday that followed, I visited this brother and I realized that his health was deteriorating. I continued to visit every two days. For nearly three weeks, I prayed and sang with his wife while the husband was watching television. He wanted nothing from me but I kept going to visit. One Sunday, I brought communion to the nursing home and I offered it to him. Then he asked me to sing a specific hymn before sharing communion. As you can imagine, I felt blessed.

The following visit, I found him alone and hungry. His wife, who usually fed him, was late. The staff had resigned since he treated them unkindly. He was trying to eat but could not. Standing near the bed, I watched a few minutes while he smeared his face with food. I approached the bed and I stretched out my hand without saying a word. He put the fork in my hand without being asked and mostly without resistance. It was a highlight for both of us through our eyes, our hearts, and our hands. I started to wipe his face and I fed him slowly. While I fed him, I remembered the biblical passage in which Christ tells us, “I was sick and you visited me…” How could I remain indifferent to this helpless man when God gave me the opportunity to consolidate our relationship and take care of his beloved son?

I remember the day of the funeral of this brother in Christ. At the cemetery, as I proclaimed praise before the funeral, I bent to make the sign of the cross on the casket just as an order was given by someone to lower the coffin. I got back up in time to avoid falling down on the coffin. Outraged, the widow asked the lowering of the coffin to be stopped so that I could continue the service. Two weeks later, she invited me to her home for coffee and asked, “How do you do it?”

Regardless whom we are within Christ’s Church, we are called to minister to his body by following his pathways with the presence of the Holy Spirit as promised. As Christ’s disciples, forgiveness is not an alternative, rather an obligation, a way of living. If we are wondering how we can forgive those who hurt us, let us always keep in mind the words from the Lord’s Prayer, taught to us by Christ himself: “Forgive us our trespasses as we forgive those who have trespassed against us.” Of course, I don’t forget, but I forgive.

By doing so, we will be the light carriers to enlighten the world about the love that we enjoy from God, regardless of our gender identity, race, age, sexuality, class, ability, language, and so on. That’s why I refused to abandon my call. I refused to pay attention to all the wickedness and the misunderstandings I was facing. Up until today, I can’t explain why I did not stumble and flee. Nevertheless, I am certain that the assurance within me when I was acting as a servant of God to the people of God, came from the Holy Spirit. All my provision is placed on this table of which David speaks in Psalm 23:5. On that table I find love, forgiveness offered and received, benevolence, reconciliation, understanding and so on. Unconsciously, I helped myself from this table whenever I needed it.

—The Rev. Marie-Claude Manga works as a social worker and minister. She is on the executive board of La Table des ministères en français  and sits on the executive of the Nakonha:ka Regional Council. This is an excerpt from her presentation on the 80th anniversary of Lydia Gruchy’s ordination, and of the life and work of ordained women within the United Church.