Facing the Past, Transforming the Future

Black History Month is not only about celebrating African heritage, but also about learning from painful acts of the past in order to live a more just future. 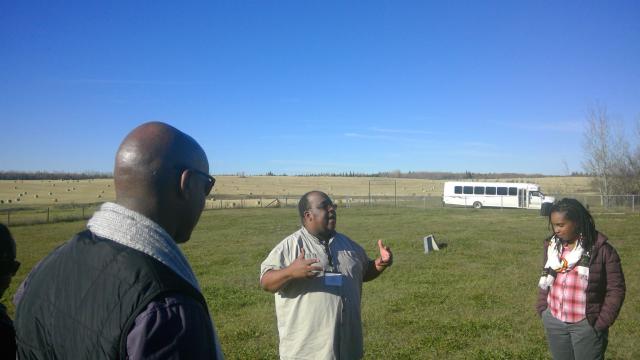 Author, Paul Douglas Walfall (centre), with a group of Black clergy on a visit to the cemetery at Amber Valley, AB.
Credit: Adele Halliday / The United Church of Canada
Published On: February 5, 2019

“History, despite its wrenching pain, cannot be unlived, but if faced with courage, need not be lived again.” —Maya Angelou, “On the Pulse of Morning”

In July 2017 I received the then latest issue of The Journal of the Historical Society of the Alberta and Northwest Conference of The United Church of Canada. In that issue I was particularly interested in the article “The KKK and the Church,” written by Rev. Lloyd Lovatt. It was interesting reading and yet it was also difficult at points to absorb. I read that the Ku Klux Klan came to Alberta in the 1920s through the work of a Methodist, and then United Church, minister. Equally difficult was to read that clergymen of the United Church were Klansmen and to note that at the time the United Church had the unsavory reputation, according to the writer of the book “The Ku Klux Klan in Central Alberta,” of being a church that “refused to condemn the Klan’s activities.”

The article also noted that in 1927 a resolution came to the Saskatchewan Conference “not to support the Ku Klux Klan in any way.” The Conference ultimately accepted the recommendation “that Conference refrain from making any deliverance on the question.” This was particularly difficult to hear, and I wondered what was happening to the church at that time. Indeed, the silence of the church then seemed to have been a betrayal of many things I hold most dear. Yet, I will not condemn the Conference or the church for its silence then, but I will wonder when there is silence by the church on the issues of racism in our contemporary society.

It is February and once again we will be observing Black History Month in Canada. Black history in Canada is the history of Canada. In this month we will be acknowledging and celebrating the accomplishments of many Black people, and rightfully so. Yet if all we do is to only acknowledge the points of celebration then I believe we would not be looking at the truth. History is made up of good and bad experiences and both must be recognized. It is when we recognize the unpleasant things of the past that we appreciate just how far we have come as a society. It makes even more significant the things that are to be celebrating. But it also challenges us to learn from the past. You see if we do not learn from our history then we will repeat the same mistakes in the future. While we have come a long way in the society and in the church, there is still much more that needs to be done.

The United Church of Canada has come a long way since the 1920s and 1930s. Today we are a church seeking to live out the vision of being an intercultural church. Much work has occurred and continues to occur through the agency of The United Church of Canada to advocate that all persons are to be treated with respect and dignity. But let us not deceive ourselves into believing that racism is behind us. Racism still exists in our society and it also exists within the church. The continued presence of racism offers to us one of many reasons why the observance of Black History month is important. The celebration of the achievements of Black people during this month continues to challenge us to stand against racism, White privilege, and White supremacy wherever they are found.

Maya Angelou is correct, it is when we face our history with courage that we will indeed avoid facing the pain of the past again. Facing the unpleasantness of the past should not incite feelings of guilt, instead it should inspire renewed commitment to work for a “new day” wherever we find ourselves. My hope is that we will not shy away from facing the pain of our history as we observe this month. Let the observance of Black History Month propel us to re-double our efforts to work for a world where “steadfast love and faithfulness will meet; righteousness and peace will kiss each other” (Psalm 85:11, NRSV). It is with this hope that I commend Black History Month this year to you.

—Paul Douglas Walfall is the ministry personnel in the Fort Saskatchewan Pastoral Charge in the Northern Spirit Regional Council. For more information on The Journal of the Historical Society of the Alberta and Northwest Conference of The United Church of Canada or to get a copy, please contact Donald Koots.

Photos used in this blog post were taken by Adele Halliday during a visit of United Church Black clergy to Amber Valley, Alberta once home to hundreds of Black people in the 1900s. They had fled from the racist Jim Crow laws in the United States to this “promised land” north of Edmonton. Their migration was around 1909-1911, and they initially found more freedom in this new community. The community cleared the land, farmed, set up a school, a post office, a town hall, a church, created homesteads, and played baseball.

Over time, they were disappointed by the anti-Black racism that they experienced in their new home; they thought they had escaped this when they left the United States. Also, the Canadian government at the time became alarmed at how many Black people had moved in, and feared a “Black take-over”, so took steps so that other all-Black communities like Amber Valley would not proliferate.

Eventually, most people left Amber Valley and moved to larger cities in different parts of Canada. Remnants remain of the all-Black settlement: a museum and cultural centre, a cemetery, a few families, and the living memories of the community’s descendants.