Opposing Symbols of Hate in Protests 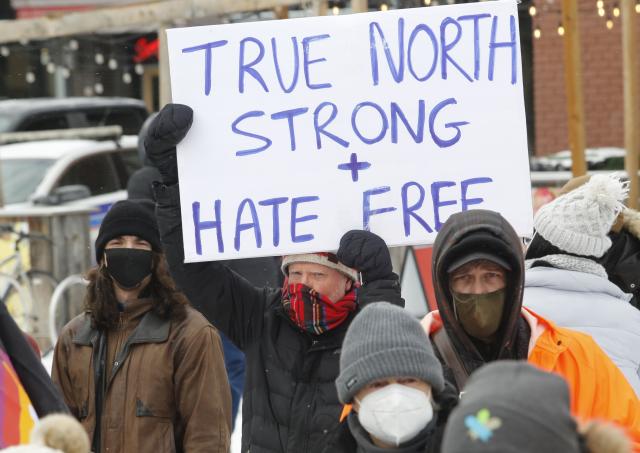 A counter-protest in Ottawa on February 12, 2022.
Credit: THE CANADIAN PRESS/Patrick Doyle
Published On: February 16, 2022

In October 2020, the people of The United Church of Canada committed to becoming an actively anti-racist church. This includes intentionally opposing signs and systems of racism whenever they are displayed in the church and society. To this end, we created a diverse Anti-Racism Common Table of Indigenous, non-Indigenous racialized, and White people from across the country to work alongside staff in providing direction on how the church can respond to ongoing manifestations of systemic racism, including White Supremacy, in the church and in Canada.

It is as the Anti-Racism Common Table of The United Church of Canada that we write to you today, in the middle of one such manifestation with protests that claim to be anti-vaccine mandates taking place across the country.

The right to protest and voice objections are valued in every democratic society. As the Anti-Racism Common Table, we support the right to protest non-violently. We are also moved to express our deep concerns about the current “Freedom Convoys” and demonstrations occurring across the country.

We are concerned that these demonstrations have become places of hate and oppression. We do not support the use of symbols of hate such as swastikas and the Confederate flag; the appropriation of Indigenous cultures, ceremony, and symbols such as the Every Child Matters flag; and the use of racist, ableist, anti-Semitic, Islamophobic, misogynistic, homophobic, transphobic, and anti-immigrant language and threats. We have seen this not just at the protests themselves, but also on social media in support of them. Our commitment to becoming an anti-racist, intercultural, and reconciling church requires that we name this clearly.

This is not an isolated event; it is an expression of the ongoing racism and White Supremacy that is at the heart of Canadian society, and which the Canadian Anti-Hate Network has documented.

If you are White and you remain unconvinced about the centrality of racism in these protests or are attributing it to a few “bad apples,” we challenge you to undertake a very hard and possibly uncomfortable examination of your own beliefs.

If you are Indigenous or racialized and feeling unsafe, fearful, or dismayed by the silence of some White people in the face of this violence and the support for it from others, we remain in solidarity with you. You are not alone.

If you are within the United Church community, we challenge you to discern how, as a disciple of Christ, you are called to respond. Please use your voice against racism whenever and wherever you can, with calmness and faithful persistence, with the goal of making the racism and discrimination in these protests unequivocally clear. Commit to using local media, social media, and resources and conversations in your community of faith, in your own circles, and with political representatives. Support and care for one another as you use your prophetic voice. Recognize the emotional and spiritual impact of racism on us all, especially people who are Indigenous and racialized.

Even when these protests have come to an end, the broader systemic issues in which they are rooted will not.

About the Anti-Racism Common Table