As a recent immigrant from Asia, Rev. SunDo Hyun finds that opening oneself to intercultural opportunities — despite the challenges — can be transforming and life-giving. 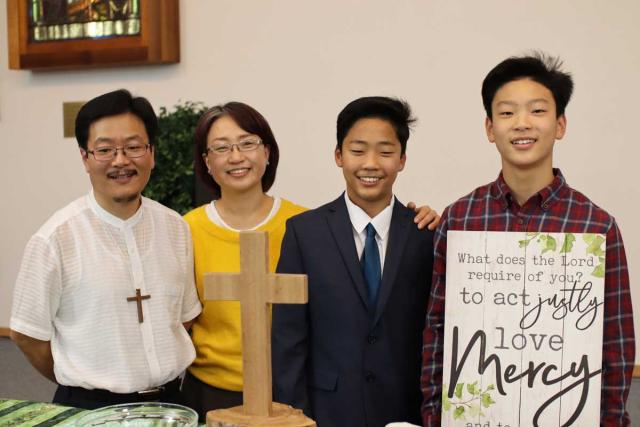 The author, SunDo Hyun (left), and family.
Credit: Courtesy of SunDo Hyun
Published On: May 12, 2020

May is Asian Heritage Month in Canada, an opportunity to prayerfully reflect on the contributions of Asian Canadians to Canadian society, and to honour and celebrate this important aspect of Canadian history.

I’m a recent immigrant to Canada who came from Asia. Having lived in Canada for the past 10 years, I’ve noticed that there are incredibly diverse groups of people living in Canada, yet the dominant cultural group may be represented by the White European English/French-speaking Canadian citizens.

Living in Canada as a racialized person, I’ve developed my racial justice sensitivity regardless of whether I wanted to or not. This is partly because my family and I have experienced casual racist comments and routine discrimination, as well as because I feel obligated to protect my children from being harmed or mistreated based on their skin colour and ethnic background.

Living in Canada as a visible monitory, I feel vulnerable when exposed to increasing anti-immigrant sentiment and the White nationalist movement in Canada, false information about refugees and immigrants, and controversy around the Quebec law banning religious symbols for workers in public positions (which I see as targeting mainly the visible ethnic and cultural minorities).

Living in Canada as a recent immigrant who speaks English as my second language, I have been working hard to overcome the “no Canadian experience” label, and to perform my work effectively — to the degree that people might see beyond my English accent and recognize my abilities.

Living in Canada as an immigrant from Asia where different nations have been struggling with the painful legacy and unsolved historical resentment of colonialism, I’ve been paying attention to the Canadian history of colonialism and its ongoing systemic injustice and generational impact on the Indigenous people and their communities. I’ve found myself getting passionate about working towards Truth and Reconciliation in Canada.

Living in Canada as someone from a small country — smaller than most provinces in Canada, I am often fascinated with the vastness and richness of nature, and also reminded of our duties and responsibilities as caretakers of God’s world.

Living in Canada where I am exposed to a lot of cross-cultural engagement, I’m convinced that “diversity is strength,” which helps me view my home country from broad and new perspectives, and also encourages me to open myself to challenges and opportunities that can be transforming and life-giving to me and others.

With all these experiences and much more not mentioned here, I feel my journey of life is in the right direction towards wholeness.

— SunDo Hyun became a United Church minister in 2016 (admitted from the Presbyterian Church in the Republic of Korea). He currently serves the Grace United Church in Meadow Lake, Saskatchewan.