What I Am Remembering

For Remembrance Day, a military chaplain and United Church minister reflects on the cost of war and peace. 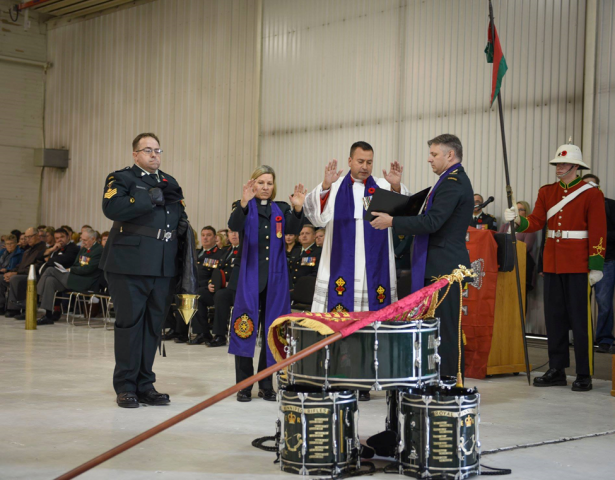 I remember when I first heard the biblical account of the healing of the centurion’s slave. It was at a church parade while on training in the naval reserve many years ago. I don’t recall which gospel version I heard, Matthew or Luke, but in both accounts Jesus responds the same, “Truly I tell you, I have not found anyone in Israel with such great faith” (Luke 7:9).

Really? No one in all of Israel has as greater a faith as a Roman centurion? Why?

Those words came to me in the early years of my call to serve in the military and they brought me much comfort. Little did I know then how my understanding of the centurion would continue to deepen and grow as I grew in Christian faith and service.

In my early to mid-20s I struggled with “what I wanted to be when I grew up.” Because of a life changing conversation I had with my economics professor, who also just also happened to be in the naval reserve, I entered university before I finished my first semester in a college business program. I had shared with him my desire to go to university after college, but I didn’t know how I could finance it. He introduced me to the idea of joining the naval reserve where I could have a part-time income while going to school in the fall and winter, and a full-time income serving and training with the naval reserve in the summer months. Shortly thereafter, by his invitation and God’s grace, I enrolled in HMCS Queen as a Logistics Officer Cadet on November 2, 1982. That day changed the course of my life.

Since then I have served the military at various times and places in both the reserve and regular force and in three different military occupations: logistics, public affairs, and now chaplaincy. I have worn all three uniforms - navy, air force and now army. God called me to the military first, and then to ministry in The United Church of Canada, and in between those two callings God also called me to full-time motherhood.

Currently, I am in full-time ordered congregational ministry at Minto United Church in Moose Jaw, Saskatchewan. I also serve as a reserve military chaplain with the Saskatchewan Dragoons, an armoured reconnaissance unit. Although at times I am stretched keeping up with the demands of this tri-vocational calling, I also know there is no life like it and I wouldn’t want to give up any of it — especially when I am called to bring light to dark places.

Last year, in what surely has been the greatest moment I have ever experienced when the light poured in. It happened at the Consecration of the Guidon ceremony for the Saskatchewan Dragoons on November 3, 2018, almost 36 years to the day I enrolled in the naval reserve.

A unit’s colours (called “guidon”) are battle honours. The colours are a flag of honour used in commemorative ceremonies today and historically to lead soldiers into battle during war. A unit’s colours are intended to wear out with time. The Saskatchewan Dragoons had received a replacement guidon for the previous one that had been used since the 1970s. As part of the ritual in receiving a new guidon, the old one is taken away and the new one is consecrated by the Chaplain General of the Canadian Armed Forces in a special ceremony. The retired guidon is then “laid up” — hung, until it finally wastes away to dust. This is a visual sign of our desire that, in time, there will no longer be any such colours to be newly displayed, and war will be at last remembered no more.

As I stood beside the Chaplain General of the Canadian Armed Forces, feeling both humbled and honoured, I was beholden to the guidon which lay (literally) on top of the drums waiting to be consecrated (or blessed).

I thought about the thousands of young Canadians who signed up to go to battle without any clue of the price they were about to pay. I thought of the young women who left their families to go work in factories for the war effort and now go off to serve in missions around the globe. I thought of my own sons and how I would feel if they were to go off to war and not come home again. I thought of war veterans whose lives changed forever because of physical, emotional, or moral wounds. I thought of the many great people I have served with in the military and how grateful I was. I thought of those who came back from war with wounds only their children would see as they suffered in silence.

After the guidon was blessed it was lifted up and paraded.

In that moment, as I contemplated the cost of war and the cost of peace, the soldiers paraded the new guidon, lifted high and proud above them. I understood why the values of a society must always be held higher than the people. I saw and felt the presence of those who passed on. I felt the pain of those who lived through war and suffered silently. Each and every time the guidon is lifted up and paraded it symbolizes the sacrifice they made for a better world.

And, in the midst of all this I heard the centurion plead for healing. And in that moment, I too pleaded for healing – for the living and the dead. Jesus, heal us…lest we ever forget.