A Trip Full of Teachings and Right Relations

During their visit to Saskatchewan Conference, the GC43 Pilgrims learned more about the First Nations groups in the area and more. 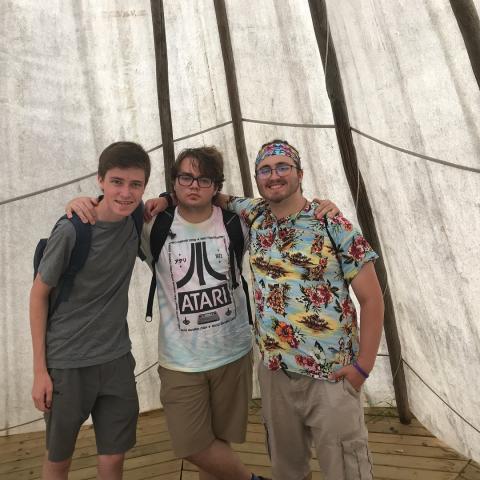 Credit: Courtesy of the GC43 Pilgrims
Published On: September 26, 2018

The GC43 youth pilgrims made their way across Canada this summer, with the goal of visiting every United Church conference, including a stop at the 43rd General Council meeting in Oshawa, ON. Read all the blog posts from their journey and see more pictures on their Facebook page and Instagram feed.

When first arriving in Saskatoon to visit Saskatchewan Conference we were greeted by friendly faces in the airport. We met our host Bailey, who would be helping us during our time in Saskatoon. We were also happy to see that we had drivers for our time in the province.

We arrived at St. Martin's United Church in Saskatoon, the church we would be sleeping in for the next three days.

For example, most of the pilgrims are used to seeing the Seven Grandfather Teachings. The cultures in the area we were visiting have nine teachings. Each teaching represents a stick on the tepee.

On the walks we had a more in-depth look on the First Nations culture in that specific area. Another great thing is that we had two tour guides from different First Nations tribes. One was Plains Cree and the other was Blackfoot Cree. It was interesting seeing the differences between their cultures alone.

Then we got to learn the how a tepee is made. And we learned that the tepee represents a mother figure, and the inside is her womb. Each pole of the tepee represents the different ages of life, from childhood to becoming an elder. It’s a circle that represents life itself, as well as the Sacred Directions.

We also had the change to watch a dancer from Plains Cree tribe. He was in full regalia and he talked about how he was able to be a dancer. He went through multiple hardships in his life and didn’t care about his culture or background. But then he decided to turn over a new leaf and he started to attend more Powwows and Sun Dances.

The next day we attended a lovely worship service at St. Martin’s United Church. Afterwards we stayed in and finished up some more written work, such as blog posts. So overall Sunday was a very relaxing day.

Monday was the day we left Saskatoon. In the morning we packed up and hauled our luggage to an organization called Out Saskatoon, a safe space for LGBTQ2+ persons. There we more properly educated of different sexual orientations, gender identities, and gender expression. We also had the opportunity to make adorable LGBTQ2+ positive buttons. We also helped them clean up a little.

Overall Saskatchewan was a trip full of teachings and right relations. And we will keep those teachings in our hearts forever.

— Kevin Parnell, the GC43 Pilgrim from Montreal and Ottawa Conference