A Prayer for Okinawa – Part I

Peter Fergus-Moore shares the sad history of Okinawa and the work to defend Article 9 of the Japanese Peace Constitution. 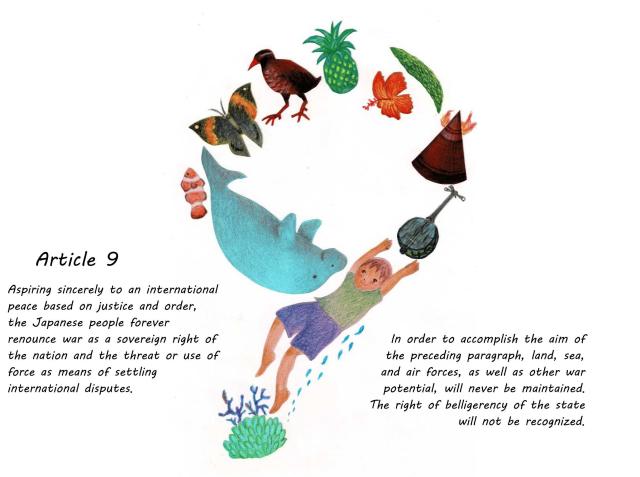 The logo of the March 2021 7th Global Inter-Religious Conference on Article 9 of the Japanese Peace Constitution, picturing Okinawa flora and fauna, cultural symbols, and a child swimming in the ocean.
Credit: Used with permission from the artist, Mio Kokubun.
Published On: May 28, 2021

I live in the midst of privilege in the COVID-19 pandemic, and in the midst of relative safety politically and geographically in Thunder Bay, Ontario. But it has not always been so: in 2013-14, I was a United Church participant of the World Council of Churches’ Ecumenical Accompaniment Program in Palestine and Israel (EAPPI) and a member of the 50th Team to serve. While I was in little real danger or hardship, I lived in a Palestinian community in the West Bank. I got to know Palestinian people whose daily lives are circumscribed by the armed military of an occupying foreign power, who abused them and ignored their rights as human beings and children of God. The Palestinian reality opened my eyes to truths I had not known.

So when I was accepted by The United Church of Canada to be part of three-person delegation to attend the 7th Global Inter-Religious Conference on Article 9 of the Japanese Peace Constitution planned for March 2-3, 2021, I had a hunch I would find some parallels between the situation in the West Bank and the islands of Okinawa and Guam. In retrospect, I am deeply surprised at how many there are.

Firstly, Article 9 in the post-World War II Japanese Constitution forbids that country from military aggression, war, and from maintaining anything stronger than a self-defense force. For a variety of reasons, successive governments in Japan have tried to water down or evade the explicit responsibilities laid down in Article 9. The recent administration of former Japanese Prime Minister Abe actually participated in the Iraq War by sending logistical support—which is strictly forbidden under Article 9.

Many Japanese are profoundly worried that the conservative nationalistic forces in Japan could bring their country back into the dark days of imperialism—in the days of nuclear capability, such a military resurgence would prove catastrophic. Furthermore, proponents of Article 9 see it as exemplary for the world, a gesture of deliberate peacemaking when sabres are rattling everywhere.

The 7th Global Inter-Religious Conference was co-sponsored by the National Christian Council of Japan, a Mission & Service partner of the United Church. By necessity, the conference took place in real time through an online connection. Real time meant that we three United Church people signed in at 5:00 a.m. Eastern time, as the conference started at 7:00 p.m. Tokyo time.

Of particular interest for me was context of Okinawa, about which I knew very little. Of all those involved in the conference, the experience of the horrors and aftermath of war described by Okinawans offered the most passionate case for preventing armed conflict if at all possible.

"The Sad Song of Okinawa"

The World War II Battle of Okinawa, the so-called “The Typhoon of Steel,” lasted from April to July, 1945, and resulted in the total defeat of the Japanese Imperial army by U.S. Army and Marine troops. The largest share of the battle casualties were in fact Okinawan citizens: over half of the entire pre-war civilian population of 300,000 was wiped out. Okinawans were caught in crossfire, deliberately murdered, or forced to commit suicide by retreating Japanese troops.

"The Typhoon of Steel," is written about in The Sad Song of Okinawa,  a vividly printed book written by Toshi and Iri Maruki in the original Japanese. The book has been translated into English with participation by The United Church of Canada, among others. The book's account is dripping with grief.

You can get a sense of this tragedy at the Okinawa Prefectural Peace Museum, which is devoted to a thorough account told from an Okinawan perspective of what happened in the Typhoon of Steel. In Room #4 (of six rooms), you will find in the silent darkness some dozen or so lecterns, each under its own spotlight and each bearing an open book. These contain survivors' testimonies. The museum's guidebook relates that like many survivors of catastrophe, Okinawans had originally been reluctant to talk about their painful experiences. Noticing the threats to Article 9, they changed their minds and recorded their stories, hoping to avert the possibility of catastrophic armed conflict emerging in their region once again. 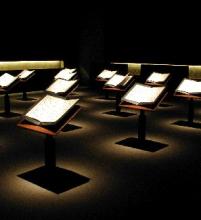 Early in the conference, the members of Futenma Baptist Church in Okinawa, together with pastor Rev. Takehiro Kamiya, staged a dramatic reading of a script based on the story of a survivor of the Typhoon of Steel, Rev. Shigeaki Kinjo. Shigeaki-San was a boy during the Battle. Having absorbed from Japanese soldiers the tales of American ruthlessness and butchery, he felt that the end had come for them all. Terrorized, Shigeaki-San beat to death his mother, younger brother and sister. He was not alone in such acts—many survivors have similar memories. I was very moved by the dramatic reading by one whose horrific memories suggested a means of redemption in telling his story, and in working to preserve Article 9.

—Peter Fergus-Moore attended the 7th Global Inter-Religious Conference on Article 9 hosted by the National Council of Japan virtually in March 2021 along with Joseph Yong Wook Kim and General Council Partnership Program staff Patti Talbot. Part II of his reflections on the Conference will be published next week.

Peter’s reflections also continue in his own blog, Peace Making in the Shadow of Empire.

Peter is one of a number of people available to share their stories of the global church with United Church of Canada communities of faith. See our list of available speakers.

Does this blog pique your interest to participate in people-to-people opportunities with global partners? We invite you to find out more at the People in Partnership webpage or by emailing us.