Listening to the testimonies of the families was hard. The sacred fire was good medicine to have close by. 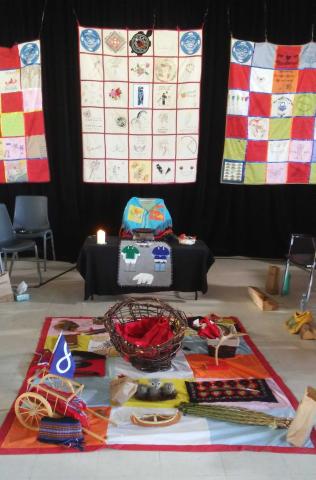 While at the National Inquiry into Missing and Murdered Indigenous Women, Girls and 2 Spirits in Maliotenam, Quebec, I heard many families express relief and gratitude to finally share their stories. Over 60 families provided testimony in public and private hearings in Maliotenam, Quebec. Families have come from Pakua Shipi, La Romaine, Natashqan, Maliotenam and Uashat, Pessiamit, Manawan, and Baie Comeau. I was touched to see a woman drummer accompany each family to their seats in front, while singing a healing song before they testified.

The families shared many different stories, including the “ghost babies.” The term “ghost babies” is used for the Indigenous women who have given birth and their baby was taken away for “medical” reasons. The missing babies never returned to their mothers. To this day, families are unable to get details of what happened to their babies or get death certificates. What upsets and confuses me is how the systems such as the police, hospitals, and so on could disrespect these families by not informing them of what was happening, considering that neither French nor English is their first language! Families were kept in the dark and they did not know whom to turn to in their panic while searching for answers. So the families used the little community resources they had at the time, which were practically nonexistent.

The local community centre was very inviting, “travelling quilts” bearing messages of support and encouragement were hanging in front with an empty chair representing the missing person was placed in front of a table. On a blanket on the floor were placed different objects given by different communities. Sage was burnt when necessary. This experience reminded me of the Truth and Reconciliation Commission hearings that I also attended. I saw many of Elders present and available to support as well as Traditional medicines used to help bring calmness and grounding.

There were workers from the First Nations Health and Social Services from Quebec and Labrador, which is located in Wendake. I engaged the families and learned that the commission covered their travel, accommodations, and food. There was tea and coffee, and lunch provided on site as well as snacks. I also noticed that the family centre next door was open to families to go rest and chat. There were quite a few roamers too.

The complaint that arose twice was the families’ lack of support “out there.” For example, the CAVAC (Crime Assistance Victim Centre) was approached by some family members for access to psychological help, but they were told they do not qualify. This is well known throughout Quebec, only victims qualify, however often times the victims are gone and the family left behind.

Each day was hard because of listening to the testimonies of each family. The Elders had a sacred fire going so I went there for prayer before the day started and it helped me. I noticed many people went there too. The sacred fire is good medicine to have close by.

— Gabrielle Lamouche is Mohawk from Kanesatake, Quebec and an active member of the Aboriginal Ministries Council within The United Church of Canada.

Attend a community hearing in your area.

You can also watch the National Inquiry live stream or past community hearings.

See the accounts from other MMIWG hearings around the country.