There was a real lack of equality to keep the people safe. We need proactive police not reactive. We needed more in our tool box to prevent Missing and Murdered Indigenous Women and Girls than frontline policing. 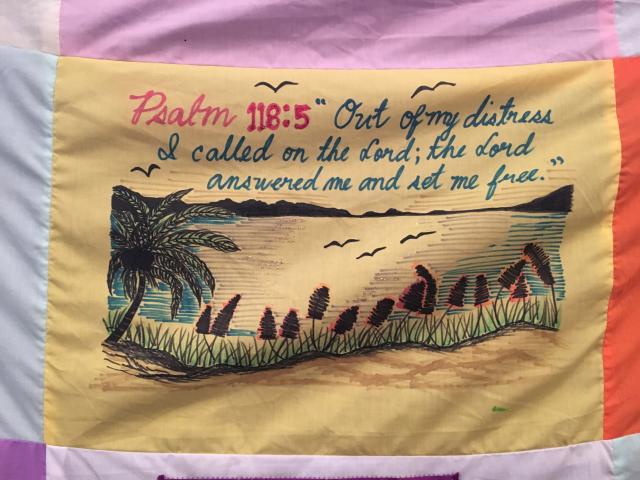 Part of the blanket from the National Inquiry
Credit: Honarine Scott
Published On: December 20, 2018

Quebec City, traditional territory of the Wendat people, hosted one of the last hearings of the National Inquiry into Missing and Murdered Indigenous Women and Girls (MMIWG). This particular hearing focused on the Justice System and Indigenous women. On arrival at the National Inquiry, I was surprised to see a familiar name in the agenda. Presenting for Nishnawbe Aski Police Services was Chair of the Board, Mike Metatawabin and Terry Armstrong, Chief of Nishnawbe Aski Police Services. I knew Mr. Metatawabin because we are from the same community. They spoke about the safety issues that the Cree, Ojibway and Oji-Cree peoples face in northern Ontario.

For the past twenty-four years, Nishnawbe Aski Police Services, often referred to as the NAPS, have been challenged to keep everyone safe with less funding, resources and capacity than their police counterparts in municipalities. For example, only one NAPS officer is available in each community. There are no radios or central communication system. There are no funds to keep the lights and heat on or to make repairs in their police detachments. Now why is that? It is based on the original agreement between the NAPS and the federal and provincial governments, which funds the NAPS like a program, not a legislatively based service with the same standards as the municipalities or provincial police.

This agreement underlined a huge issue of inequity of policing in northern communities. Terry Armstrong, Chief of NAPS shared:

“There was a real lack of equality to keep the people safe. We need proactive police not reactive. We needed more in our tool box to prevent MMIWG than frontline policing. The Indigenous people need to create their own police to keep themselves safe and to be treated the same. When you put on a badge and swear to protect people and you don’t have the tools to do it and you see the devastation day in and day out. It’s tough.”

In critical incidents like family violence, the Chief and Council members sometimes put themselves at risk by helping a NAPS officer in need of backup. This often led to a higher risk of harm, trauma and stress for everyone. In municipalities, a police officer would never have to request backup from the mayor and council. What makes even less sense is that the NAPS are not available 24/7 like other police. If a woman was in need of safety, there was no one to call after a certain time. The lack of safety forces vulnerable women and girls to leave their homes and flee to the south away from their language and culture. In the south, they could face other forms of violence that have led to the disproportionate level of violence towards Indigenous women and girls. This is unacceptable.

Over many years, NAPS and Nishnawbe Aski Nation have advocated to renegotiate their agreement with Ontario and Canada to bring better policing standards without success. I was relieved to learn that in January 2019, all First Nation communities will have the option to become recognized under the police services act and to receive the appropriate funding for adequate services. In commenting on the success of their advocacy, Mike Metatawabin said:

“We had to do something. We were not taken seriously. I am hopeful that this process will spread across the country so the same resources can be provided. The justice system has fallen short in our communities. [Chief]Alvin Fiddler helped push this forward to pressure the government to legislate police services in all our Indigenous communities.”

The agony in Mr. Metatawabin’s voice when he stated that the people’s safety was not taken seriously sent a chill throughout my body. I always find it deeply disturbing to learn how much Indigenous lives are devalued. In those moments, I think of my relatives in the north and the difficulties they have endured throughout this time. I held in my pain by becoming numb. Days later, I was able to express my emotions and tears with a trusted friend.

As the new year gets closer, I pray that there is a new reality for women and girls in northern Indigenous communities. A reality where they can count on the NAPS to be there when needed. A reality where women’s and girls' safety are centered on the original teachings of our people.

— Honarine Scott is Omushkego Cree from Fort Albany First Nation, Treaty #9 and is the Healing Programs Coordinator in the Indigenous Ministries Circle.