We must ensure that anyone who walks up the steps of a United Church is radically welcomed. 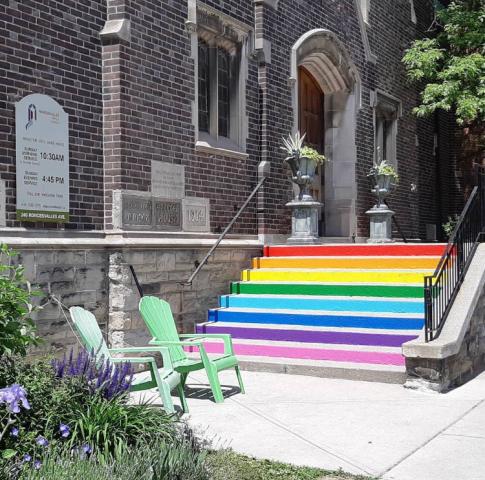 The old, grey stone steps of my local United Church in Toronto were recently transformed. They are now awash in a cheerful rainbow of hues, almost daring people who bustle by on the busy Toronto street not to stop and smile. I’m sure more than a few pedestrians have wondered, “What’s going on?”

The steps leading up to the traditional wooden double-doors of Roncesvalles United are vibrantly decked out for Pride month. The concept of a church celebrating lesbian, gay, bisexual, trans, and 2-Spirit (LGBTQ2) people is not new to those of us steeped in United Church values, but it is for many others.

Recently, I was chatting about my involvement with Roncesvalles United at a friend’s backyard gathering. One person’s mouth dropped. “Did you say your minister was lesbian?” he asked rather dumbfounded, as if I had proclaimed zebras had polka dots instead of stripes.

The individual, whom I met for the first time that day, told me he was gay. He said he couldn’t remember the last time he was in any sort of “religious institution”—except to attend funerals—and was taken aback to learn that a church not only welcomed LGBTQ2 people, but encouraged them to become members, and enthusiastically married and ordained them.

I am straight. But the United Church's acceptance of LGBTQ2 people was one of the strong tugs I felt toward the church in my late 20s when I was looking for a spiritual home, after not stepping inside a “religious institution” since my pre-teen days singing in a suburban Anglican choir. My first—and current—United Church ministers proudly identify as LGBTQ2.

This year marks the 30th anniversary of the United Church’s 1998 decision to declare that all people, regardless of sexual orientation, are welcome as full members in the church. And all members—including those who identify as LGBTQ2—are eligible to be ordained ministers. Sometimes I wonder why it took until 1988 for the church to make the call to embrace LGBTQ2 people. Perhaps it is no coincidence that the top-charting song of that same year was “Faith,” by the beloved gay Brit popstar, George Michael.

It is easy to question why the church’s full embrace of LGTBQ2 people did not happen until the late 80s. And why it took three, full decades longer for UC to launch Iridesce: The Living Apology, a project that reflects and talks about people’s LGBTQ2 experiences leading up to, and proceeding, the church’s 1988 decision.

But recent events remind me that both the 1988 decision and the Living Apology are deeply progressive initiatives.

On June 7, Doug Ford was elected Premier of Ontario. He is apparently squirmish about Pride and has yet to decide whether he will participate in Toronto’s wildly popular Pride parade. Let’s pause and reflect on the reality that this is happening in the biggest, most diverse city in Canada, and in 2018.

More recently, on June 12, Historica Canada released the first “Heritage Minute” focusing on the LGBTQ2 community’s fight against discrimination—a continued struggle for many, many non-straight people across this country. Thousands of people shared the video on social media, beaming with Canadian pride. Given that Heritage Minutes were launched in 1991, perhaps the more appropriate public response should have been, “what took so long?” as opposed to a collective pat-on-the-back.

What is most disturbing though are the protests at this year’s Pride celebrations. A group that has the audacity to call itself “street preachers” boldly imposed itself on a late-May Pride event in Barrie, ON. One of the tamest signs the group carried declared, “Jesus Opposes Your Pride, Repent.”

In Hamilton, ON, the LGBTQ2 community, United Churches, activists, and supporters prepared for a similar outpouring of intolerance in that city. It was comforting to hear Rev. Ian Sloan, of New Vision United in Hamilton, tell CBC, "We start from the basis that all humans are made in the image of God, that God's image is inclusive and diverse.” I am confident that Jesus, one of the world’s greatest social agitators, would have joyfully donned rainbow-coloured robes, and raucously marched in as many Pride parades as possible.

For as long as I remember, Roncesvalles United raises a rainbow flag in early June. It is always torn down several times, and then congregants, including myself, and minister Rev. Anne Hines cheerfully, defiantly hoist it back up. This, in a neighbourhood affectionately dubbed, “Queer West.”

As a proud church member, volunteer, and employee, I am reminded this 2018 Pride month that we—the United Church—must never stop shouting our openness from the rooftops. We must never stop drawing the circle wider, acting on that divine nudge to find the next barrier to compassionately break down. We must all play a role in ensuring that anyone who walks up the drab, or colourful, steps of a United Church is radically welcomed.

— Kathryn Dorrell is the senior editor in the Communications Unit of the General Council Office.