Keeping Memories, Dreaming of the Future

Keewatin Presbytery — the first Indigenous Presbytery in The United Church of Canada — shares stories as they gather to say good-bye. 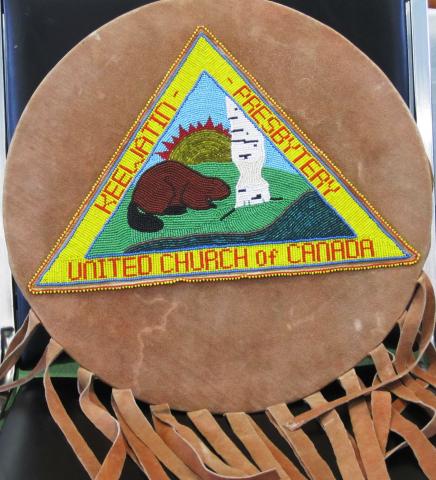 In February, members of Keewatin Presbytery — the first Indigenous Presbytery in The United Church of Canada — gathered to say good-bye (see photos). They made the trip to Norway House First Nation, in northern Manitoba, by winter roads, small aircraft, and by the nine-hour drive up windswept Highway 6 from Winnipeg. One vanload did not get there because it hit a moose along the way; the passengers were badly banged and bruised, but not critically injured and were medevacked to Grand Rapids.

In 1981, the Conference of Manitoba and Northwestern Ontario met in Thompson, Manitoba. There the “Northern Elders Council” of Northland Presbytery requested an Aboriginal Presbytery be created and called Keewatin.

Keewatin Presbytery includes First Nations Communities of Faith from Manitoba and from northern Ontario presbyteries. In 1988, the All Native Circle Conference was created and includes Indigenous ministries from Quebec to Alberta. British Columbia Native Ministries and some Ontario and Quebec congregations elected to remain within their geographic Conferences and Presbyteries.

“We were always outvoted at Conference and Presbytery,” recalls Rev. John Thompson of Oxford House, Manitoba, “so we never had a say, our concerns were never heard. With our own presbytery we could support ministry and make decisions that reflected our values and contexts.”

Rev. Nelson Hart of Nelson House, Manitoba says, “It had to do with language. At meetings we were stuck in back corner. Our Elders spoke Cree or Saulteaux or Oji-Cree. There was no translation. They didn’t know what was happening. They couldn’t speak.”

The theme of this final gathering of Keewatin was Apasapowin Mina Wekoskawin — “Remembering and Honouring Our Past as We Move Forward.” Rev. Evelyn Broadfoot of Winnipeg and her nephew Rev. Lawrence Moore of Kinosao Sipi Keenanow United Church in Norway House co-chaired the gathering. Keewatin always has male and female co-chairs. The first day was set aside for worship, Bible Study, and sharing, as is the traditional practice. Keewatin meetings happen in a circle.

After opening worship, a rigorous exploration was undertaken of Isaiah 55’s promise to those who “…pursue righteousness, you that seek the Lord” in exile. Rev. Grant Queskekapow spoke of the similarities between the Babylonian exile and the residential school experience.

Memories were shared, moving seamlessly between Cree and English, and interspersed with hymns sung in Cree. The stories were deeply personal. Stories about recovery from addictions by faith; seeds planted by Elders in youth who nurtured their paths to ministry; being raised by grandparents. One person shared his fear that returning to Norway House - where he attended residential school — might trigger new trauma.

Ministers spoke about the impossible needs they face in the communities traumatized by the “Sixties Scoop,” residential schools and forced relocation of whole communities to make way for flooding by hydroelectric dams.  There were stories too about the chronic stress caused by overcrowded substandard houses, crushing grocery prices, absence of clean water, inadequate medical care, and educational funding far below provincial rates.

And dreams — not metaphorical visions but actual dreams — were shared. Some recent, others dreams of Elders now passed on but carried by the community. One of the dreams was had years ago by Sanadius Fiddler of Sandy Lake, Ontario. In it he saw his people as a beautiful vase that had been smashed and the pieces scattered by settlers. He said that it was the work of his people to gather the broken shards and put them back together.

The teachings of the Keewatin Crest — designed by Rev. Publus Fiddler and Elders — were shared. Eleanor Thompson, a candidate for ministry, beautifully beaded it. The crest shows the beaver, hard-working, persistent, who small piece by small piece can accomplish anything; the Birch Tree, strong and flexible wood for snowshoes and for sweet sap. The crest also depicts a familiar quote testifying to the promise of the enduring nature of treaties: “…as long as the suns, the waters flow downhill, and as long as the grass grows green.”

In spite of the promises of Caretakers of Our Indigenous Circle’s Calls to the Church (see "Downloads" at the bottom of this page), there was grief and there were fears about becoming lost and losing voice again in the new Regions of the non-Indigenous church. There was also surprising spirit of hopefulness present in the gathering. Some of that hope came in a small package. All weekend the toddler-aged son of Eric and Eva — both candidates for ministry at the Sandy Saulteaux Spiritual Centre — tottered around inside the circle. Perhaps he was absorbing the stories; certainly he stirred the hopes of the Elders. During an honouring ceremony, the little boy was presented with a pair of moccasins, a sign that he would one day walk as a leader, his voice and his way respected. Watch for him in days to come; his name is Moses Nothingg.

— David Giuliano is a member of the Aboriginal Ministry Circle and was asked to write this account by Rev. Evelyn Broadfoot, co-Chairperson of the Keewatin Presbytery.