St. Paul’s Indigenous Circle is an active group in a United Church congregation encouraging all to travel the difficult road to healing and reconciliation. 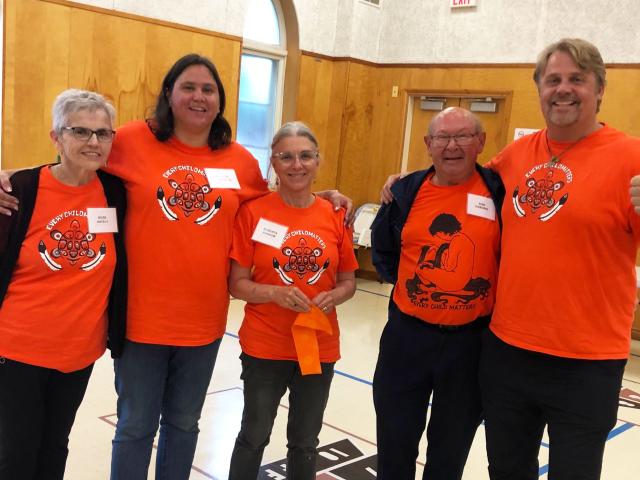 In 2018, a group of people interested in raising awareness and understanding of Indigenous history, culture, and current reality began to meet at St. Paul’s United Church in Bowmanville, ON. The newly formed Indigenous Circle went on to hold two educational sessions in spring 2019. The first was led by Rev. Bryan Ransom (Algonquin and retired minister) on Indigenous history in Canada. One a week later, Lori Ransom (Algonquin, staff at the General Council Office, and Bryan’s first cousin) led a workshop on the Truth and Reconciliation Commission of Canada’s (TRC’s) Calls to Action and what United Church people and Canadians must do to live into reconciliation with Indigenous people.

Rev. Lee Claus (Onkwehon:we) preached at St. Paul’s worship service for the Indigenous Day of Prayer (held the Sunday before National Indigenous Peoples Day), one again stirring emotions and calling the congregation to action. These educational sessions and worship service were thought-provoking, starting a momentum that led to planning a conference for September 28–29, 2019, held to coincide with Orange Shirt Day (September 30 each year).

Indigenous Discovery Weekend was attended by about 80 people, most coming from the surrounding community and the United Churches in Bowmanville. Travis Dugas Bellerose (Cree) from Alberta, a motivational speaker, actor, musician, and dancer, gave the keynote address. He spoke from his heart as he told his story. Folks were moved to uncomfortable places as they learned about the results of the atrocities of residential schools and colonialism, the racism in our country, and how these impact Indigenous people today.

Dr. Shirley Williams, professor emeritus from Trent University and a prolific writer, spoke about her experiences at residential school and left listeners feeling sad but inspired by her strength and determination; she shares her story so that others may learn from her as they travel the road to reconciliation. Matthew Stevens, Bear Clan member of the Shining Water, Serpent River Ojibwe, and the Cultural Coordinator for the Mississaugas of Scugog Island, shared some of the history of his people. He also discussed the loss of their culture and language and spoke about the impact of the Indian Act, residential schools, and colonialism. He described how the Mississaugas are now rebuilding that which was lost. Rev. Bryan Ransom spoke about the Doctrine of Discovery and how it continues to have negative impacts on Indigenous people. Pam Hart shared moving stories about a series of quilt squares that were created by members of the Kawartha Truth and Reconciliation Support Group. The designs are inspired by the stories of children who endured the residential school system. This support group of Indigenous and settler people seeks to model reconciliation by learning and working together.

A Métis drumming circle provided an outlet for people to engage in a meaningful and uplifting activity. Some took the opportunity to participate in the circle itself. All listened and learned about the importance of drumming and song within Indigenous spiritual traditions and for healing.

"What More Do They Want?"

A joint worship service with St. Paul’s and Trinity United, Bowmanville was planned by the Indigenous Circle and held on September 29 . A play entitled What More Do They Want?, co-written and performed by St. Paul’s member Andrew Jackson along with Travis Dugas Bellerose, was presented as part of the service. Andrew performed the role of a United Church minister in the 1950s as he promotes the residential school system as a ministry of the church. Another minister is depicted in the 1980s as struggling with what Indigenous people were telling the church about their experiences in the schools. The play ends with a minister in 1998 when the second apology was given by the United Church; the minister is beginning to demonstrate an understanding and awareness of the pain that had been caused and take responsibility for it.

His counterpart was Travis, an Indigenous Spirit who responds to Andrew’s story: Travis wants to reconcile with each minister but needs to tell a truth of his own, a heart-wrenching story of pain as his family is torn apart and broken by the experience of residential schools. Those in the congregation were uncomfortable and will be haunted by the things they heard—alcoholism, broken families, suicide, drug abuse, violence, racism, degradation, pain, pain, and more pain. Travis and St. Paul’s minister, the Rev. Michelle Brotherton, left the congregation on a note of hope and encouraged all to travel the difficult road to reconciliation. Michelle showed courage and insight, naming her White privilege and the privilege of many in the congregation.

After the service, attendees were delighted to partake in an Indigenous food tasting that was prepared by Chef Charles Catchpole, an Indigenous chef who came from Toronto to offer his culinary skills and hospitality. The congregants were also excited to shop at an onsite Indigenous artisan show and book table.

Participants in the weekend arrived with a range of knowledge and experience of Indigenous issues. They left remembering what touched their hearts and minds from the two days of listening and experiencing, many ready to tell and re-tell the stories they had heard so that others can learn and gain insight.

The Indigenous Circle hopes that the experiences offered at Indigenous Discovery Weekend will move all who were present to action, understanding, and eventually a time when there is reconciliation with the Indigenous peoples of Canada.

The Indigenous Circle took a much-needed break following these events! However, this growing group is now planning events for 2020, including possibly another event to mark Orange Shirt Day.