“I Yearn for Peace”

Reflections at the Canadian launch of Korea Peace Now! Women Mobilizing to End the War 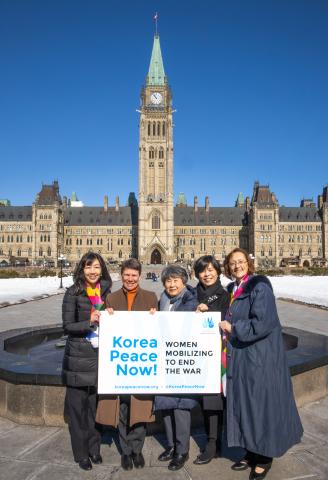 On March 18, 2019 the Korea Peace Now! Women Mobilizing to End the War campaign was launched in Ottawa. Initiated by a coalition of women’s peace organizations, this global campaign calls on the United States, North Korea, South Korea, and China to end the Korean War, sign a peace agreement, and to include women in the peace processes. Visit our Take Action, to ask the Canadian government to lift crippling sanctions and engage for peace in the Korean Peninsula. Join the United Church in becoming part of the growing movement working for an end to war and lasting peace on the Korean Peninsula.

On September 19, 2018, President Moon Jae-In of the Republic of Korea (ROK) during his third Summit Meeting with the Chairman Kim Jung-Un of the Democratic Peoples’ Republic of Korea (DPRK), delivered a moving message to the North Korean people in Pyongyang. President Moon observed that the Korean people have a shared history of life together of some 5000 years. It is only during last 70 years, he noted, that the Korean people have lived separated and divided. "Let us go forward toward a new future,” he urged. “The people of Korea must live together."

My life has spanned those 70 years of division in Korean history. I was born in north Korea. I was a small child in 1947, just two years after the 1945 division of the peninsula, when my family sought refuge in south Korea. My family, like many others, was displaced again during the Korean War of 1950-53.

Seventy years talk of war, peace, unification had deep effects on mind as I grew up. Over these decades of separation, many people have passed away, including my parents and siblings. My 90-year old brother and many others live with the continued pain of war and division, scarred in body and spirit. I yearn for peace from the depth of my soul.

I understand that sin means the separation from God, from oneself and from one another. For me, that means that for the last 70 years, Korean people have lived in sin; we have not lived in wholeness, and are disabled by enmity and guilt. As a nation we must ask God and each other for forgiveness. As individuals and as Korean people, we yearn for the redemption of union and ever-lasting peace with oneself, with one another and with God. The biblical images that come to mind are those of the woman suffering from hemorrhage and the bent woman healed on Sabbath. These women seem to struggle with chronic pain of shame and guilt beyond that of physical pain and disability. They cannot help themselves to healing and wholeness; they need help from others to lift them up with compassion and solidarity.

The Korea Peace Now campaign appeals to the Canadian government and people for compassion and solidarity. Stand with the Korean people so they may live in peace and wholeness. The DPRK’s Chairman Kim Jong Un has declared that he prefers to have his people fed and living in peace, rather than develop or use lethal weapons. When people feel safe and secure they do not need nuclear or any other weapons to protect themselves. The people of Korea want to hear the good news of the end of the 70 year-long war and the lifting of the sanctions and restrictions against North Korea for humanitarian assistance. The sanctions hurt only the most vulnerable people.

I know that people in north and south Korea are eager to communicate and visit with each other freely. Can we in The United Church and in Canada help make that happen?

Before I die, I hope to fulfill one cherished wish. I want to visit my birthplace in north Korea. I want to travel on the train line that is being readied by the ROK and the DPRK – one of the inter-Korean projects – proposed jointly by President Moon and Chairman Kim, and yet prevented because of the international sanctions against north Korea. I want to board a train in Busan, the southern-most city in south Korea and travel to Shin-Uiju, my home town, in the northernmost region of north Korea, that borders China.

As we launched the Korea Peace Now campaign in Ottawa, we met Senators and Members of Parliament, policy makers and the media. Each time I asked, "Will Canada help me to ride that train?"

We are not alone. We live in God's world. Thanks be to God!

— Rev. Dr. Kyongja (Kay) Cho has served The United Church of Canada as an ordained minister since 1979 in various pastoral ministries and responsibilities. She received an honorary doctorate in 1998 from Emmanuel College–Victoria University. In 2012, she travelled to the DPRK as part of three-person United Church delegation that hosted by the Korea Christian Federation She lives in Richmond Hill, Ontario.