In Haiti, it’s Time to Change the System

Jim Hodgson reflects on the protests against government actions in Haiti. 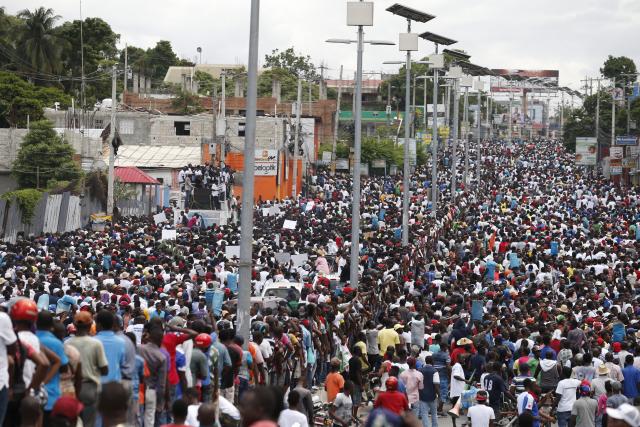 Anti-government protesters fill the street for a march in Port-au-Prince, Haiti, Sunday, Oct. 20, 2019. Anger over corruption, inflation and scarcity of basic goods has led to weeks of demonstrations asking for the resignation of President Jovenel Moise.
Credit: AP Photo/Rebecca Blackwell
Published On: October 22, 2019

Protests in Hong Kong get the most coverage, but in Latin America, protests against government actions that hurt impoverished majorities are rocking (among others) Chile, Ecuador, Honduras, and Haiti.

For the moment, I’ll focus on Haiti. You won’t see much in English-language media, but Haitians are once again trying to rid themselves of an unpopular president. Since mid-2018, mass demonstrations have disrupted daily life, and resulted in more than 30 deaths—all on the side of the protestors.

This time, the target of Haitians’ anger is Jovenel Moïse. Only 21 per cent of the people participated in the election on November 27, 2016, that gave him power. He succeeded Michel Martelly, elected in 2011—just a year after an earthquake took the lives of at least 220,000 Haitians.

Inflation is running at 22.6 per cent and the currency is depreciating.

At the heart of the present problem are allegations that the Martelly and Moïse governments misappropriated billions of dollars in aid from Venezuela’s PetroCaribe oil program. Moïse himself is accused of being part of what Haitian government auditors called an embezzlement scheme to defraud the poor, when companies he controlled or were associated with received millions of dollars in contracts, prior to him becoming president, for work that wasn’t done.

In Haiti, The United Church of Canada supports the work of Haiti’s Methodist Church and of the Karl Lévêque Cultural Institute (ICKL). Both partners report that their work is hampered by strikes and other protests, but both see that social justice must eventually prevail. The Methodist Church, which depends inpart on infusions of cash and energy from U.S. Methodist solidarity groups, announced last week that its guesthouse is closing: groups are not coming because of the security situation.

When natural or political disasters strike Haiti, we work as well with networks of other organizations in Haiti, Canada, and elsewhere.

One such network is Concertation Pour Haïti (CPH). Founded in 1994 and based in Montreal, CPH brings together a dozen or so solidarity and development organizations to press for improvements in Canadian approaches to human rights and development in Haiti. The United Church is represented at CPH by Rev. Pierre Goldberger, a retired minister with decades of solidarity work in and with Haiti.

“The population is sickened by spreading corruption that looms large, the accelerated degradation of socio-economic conditions that plunge the vast majority into sub-human living conditions, and the total impunity that prevails,” says the CPH statement. “The lack of response to the demands of the population for more than a year shows that the country is no longer governed and that public institutions no longer work. The main reaction of the ruling power has been repression, directly or through armed gangs.”

The Haitian declaration endorsed by the CPH calls for the resignation not just of the president, but also the members of Haiti’s dysfunctional parliament. It proposes an interim administration of seven well-regarded men and women—activists and academics, not politicians—as a “passarelle” or gangway towards something new. About 200 individuals and organizations from throughout the hemisphere—headed by Argentina’s Nobel Peace Prize winner Adolfo Pérez Esquivel—have also backed the call for change.

It’s tempting to trace the current troubles only to now well-documented corruption in Martelly’s time, but the truth is that even now, more than 33 years the fall of the Duvalier family dictatorship, the systems of power and fear instilled then have yet to be uprooted. That’s a process that Haitians call “déchoukaj.”

Perhaps what is different this time is that people call not just for a change of the president or the congress or even the state: they’re calling for the system itself to be changed.

—Jim Hodgson is the United Church’s program coordinator for partnerships in Latin America and the Caribbean.