A Guaranteed Livable Income Would Be Better

Lynda Trono writes, that for those struggling in an unjust economy, a Guaranteed Livable Income offers a long-term solution. 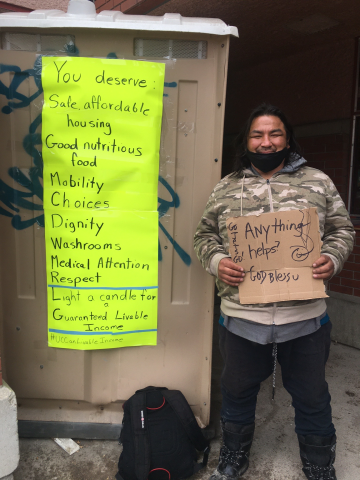 "Randy" in Winnipeg says, "Anything helps," next to a sign the lists the benefits of a GLI program.
Credit: Lynda Trono
Published On: September 2, 2021

This blog post is part of the election resources The United Church of Canada offers people who want to engage candidates in the upcoming election. Issues close to the heart of the church—Anti-racism, Guaranteed Livable Income, Indigenous Justice, and Vaccine Equity are featured as core resources on our Faith and Politics page. Resources also offer helpful hints on how people can ask questions at virtual all-candidate meetings, how to organize an all-candidates meeting, and political activity guidelines for churches.

How to faithfully celebrate Easter this year:

Only women on the Zoom call.

Call is scheduled before dawn.

We speak only of impossible things that would topple the empire.

And then, as COVID-19 hit and everything stopped and the world we knew fell apart, the impossible happened. The Canadian government introduced CERB, the Canadian Emergency Response Benefit. People who had had jobs and lost them due to the pandemic would be getting a guaranteed income to help them get by. People would not get evicted. People would not end up on the streets. People would not have to put themselves at risk in order to put food on the table. The government saved the middle class from disaster. People would be receiving $2,000 per month to live on because that’s what it costs to make ends meet. One can get by on that amount.

The people I work with in the West Broadway neighbourhood in Winnipeg have to survive year after year on less than half that. When your bedbug-infested, leaky apartment costs you $600 per month, you are left less with $400 for food, transportation, clothing, medication, toiletries, Internet/phone/cable. It is impossible to live on this without having to beg, borrow, or steal. You are always anxious about whether you will be able to survive to the next day. You have no dignity and there are few comforts in life. If you have a medical emergency, you are screwed.

It would have been a disaster to have thousands of people lose their homes. It already is a disaster for each and every person who is out there on the streets or struggling alone in unsafe living conditions. A Guaranteed Livable Income would change that. If all people had enough to survive, they might be able to reach their potential as human beings and actually thrive. We need to share Canada’s wealth more equitably.

The biblical story of the workers in the vineyard (Matthew 20:1-16) comes to mind when I think about the struggle to get Canada to implement a Guaranteed Livable Income. When I read that story, I understand the frustration of the workers who have toiled all day long. It seems totally unfair that those who did practically nothing get the same amount as those who worked a 12-hour day! They are feeling cheated. I get it.

In our Western value system, money measures the value of the work. It is our love of money and our valuing of money that keeps us in this state of not being able to eliminate poverty or deal with climate change. It is our obsession with making money, saving money, investing money, growing our money, paying less money for consumer goods, and paying less money for taxes that has us where we are today. Corporations and governments hold this worldview as well, along with significant power. This is not the worldview in the Gospel.

Imagine for a moment, that you are not one of the privileged workers who has worked all day long. You have been hired at the end of day. A merciful landowner has turned the whole system upside down and just gives you what you need to live. Just because you are human. What a feeling of relief. Even though you were not able to find work, you have enough money to feed your family. You have made a living wage. You will live. You can think beyond survival. What you thought was impossible, just became possible.

Did you collect CERB? You may know how this feels.

I’ve heard people say, “I’m just one pay cheque away from being homeless.” The job market is insecure for so many. As we move into an era of more and more artificial intelligence, it is going to get worse. If there are more pandemics on the horizon, we are in a more precarious position. And then there is climate change. That will certainly be a disruptor of a steady income for years to come.

This multi-faceted problem calls on us to do the impossible. We are going to need a “Floodway.” A Guaranteed Annual Income could be that Floodway.

If you are not from Winnipeg, you will be asking “What is a Floodway?” After the 1950 Red River flood when 10,000 homes in Winnipeg were lost and 100,000 residents had to be evacuated, the provincial government made plans for a Floodway to protect the city from future flooding.

There was a lot of opposition. Those opposed to the Floodway called it Duff’s Folly or Duff’s Ditch. They said it would be like building the pyramids of Egypt and just about as useful. it was going to cost $72 million in a province that had a net annual revenue of $74 million. In spite of opposition which said it was impossible, Premier Duff Roblin forged ahead with the project anyway. At the time, excavation of the floodway channel was the second largest earth moving project in the world (second only to the Panama Canal). Since 1968, it has prevented tens of billions of dollars in flood damage in Winnipeg.

Now is a time for similar political leadership. We need leaders who will undertake what is needed (and impossible) so that all may flourish and live with dignity.

Here in Manitoba, United Church people and others visited 13 out of 14 MPs.

From Opaskwayak Cree Nation in Niki Ashton’s (NDP) Churchill Riding to Liberal Jim Carr’s office in Winnipeg to Ted Falks’ office in staunchly Conservative Steinbach, we were there to light a flame, no matter which party. This is not a partisan issue. This is an issue for all people and all parties.

So, Easter people. Let us continue to speak of impossible things. Let’s make plans that will topple empire and usher in God’s Kingdom where each and every person will live with dignity. Let us light flames of hope and use our pens and our votes to make the impossible come true.

We have nothing to fear. We are not alone.

—Lynda Trono is a Community Ministry with 1JustCity in Winnipeg’s West Broadway neighbourhood.

The United Church of Canada Guaranteed Livable Income effort encourages all to hold a GLI worship service on October 17, The International Day for the Eradication of Poverty.