I like to picture The United Church of Canada as a giving tree, alive and abundant. 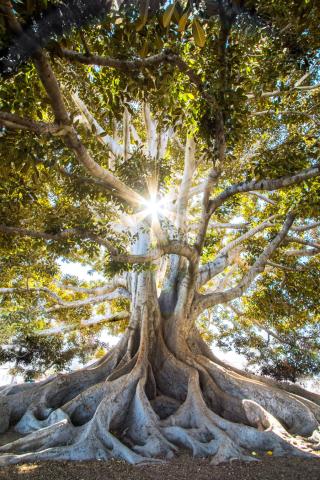 I sat down with my five-year-old recently and read him The Giving Tree, by Shel Silverstein. “It’s too sad, too bad, too awful,” he said a few pages in. And then, as we read further, he ordered me to stop. He adamantly refused to read another page of this simple, black-and-white illustrated children’s book about a tree that gives everything—branches, apples, even trunk—to a boy who grows up taking her gifts for granted. It’s a haunting book for children and adults alike.

I wasn’t surprised by my son’s reaction. When I’d read the same book to his sisters, years earlier, one had paced the hallway outside the bedroom, absolutely frantic, while the other, normally stoic, sobbed beside me. This is a book that moves people, big and little, deeply.

And sometimes it divides us. Critics and readers alike have wrestled over how to interpret the extraordinary generosity of the apple tree: Does she embody unconditional love, as Protestant Sunday school teachers exclaimed in the 1960s, or are her myriad sacrifices a sign of something sinister, perhaps the co-dependence of an abusive relationship where one gives and gives while the other just grabs and grabs?

It’s the figure of the boy, and later man, who arrests me, though. As I enter middle age and reflect on how I want to live the second half of this life, I find myself thinking about him a lot. His refusal to give anything of himself disturbs me—a spectre of the rampant selfish individualism that we all wrestle with.

After struggling so much throughout my twenties and into my thirties—huge student debt, childcare costs, a mortgage, and all the demands of everyday living—I finally have a bit extra. It’s not much, but it’s something to spare. Years of struggle, however, have made it hard to part with the extra. This is a spiritual struggle.

I have a family member, a single mother returning to school, who comes to me regularly for financial help. It’s tough, sometimes, to be expansive enough to give willingly, with a good, open heart. How much is enough, I wonder. How much is too much, I ask. And yet, I know the answer: there is no too much. It hurts sometimes to push ourselves to give extravagantly, but it’s an excellent spiritual exercise—a necessary workout for the soul.

In Silverstein’s book, as the man—always referred to, aptly, as “Boy”—ages and approaches death, he shrinks not only physically but spiritually too, his soul withering. Selfish to the bitter end, he seems incapable of thinking outside his own immediate needs—something to eat, someone to marry, somewhere to live, somewhere to rest. In short, in failing to give of himself, he fails to grow; he becomes a diminished version of himself.

Jesus let us know that radical generosity is absolutely integral to our spiritual growth and transformation. We all know that passage about “the eye of a needle.” When a man approaches Jesus asking what he needs to do to inherit eternal life, he’s told to sell all he has and give his possessions to the poor. The man departs dejected. The story, like Silverstein’s, is a kind of tragedy, with the man condemning himself to spiritual abjection.

This passage, from Matthew 19:23–26, has become a favourite for preachers of the prosperity gospel. In the peculiar logic of some American evangelists, if you give in God’s name, you get: more health, more wealth, more success. In the United Church, we don’t believe this, and yet, we are a giving people—perhaps because we trust that radical generosity will open possibilities not for material gain or profit, but for spiritual transformation.

While Canadians, as a whole, are getting cheaper about charitable giving, at least according to the latest StatsCan numbers, Mission & Service givings, while dipping overall due to declining attendance, are climbing on an individual basis. That means we’re continuing, in the face of some pretty significant challenges, to partner with people in need—from farmers struggling to make ends meet for their families in Africa and Asia, to street people requiring shelter in cities here in Canada, and everything in-between.

While the church may be shrinking numerically, our spirit of generosity is flourishing. I like to picture The United Church of Canada as a giving tree, alive and abundant as it lives in mutual harmony with people who care for each other and for creation.

—Julie McGonegal is the editor of Mandate magazine. Check out the summer issue, which offers a practical guide to speaking about Mission & Service giving.