Churches and other faith-based organizations are making a positive contribution to eliminating HIV/AIDS as a public health risk. 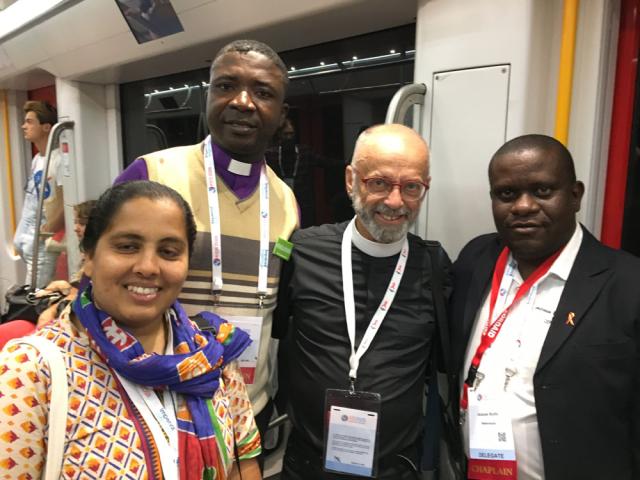 When I acquired HIV in 1987, it was “a death sentence”. One of the first comments made by my GP in 1990 in Regina, when he gave me the HIV+ test result, was that I would need more tests to find out “when the clock started ticking.” Not very comforting words. My work in the community-based AIDS movement in the 1990s was one great grieving process as we buried clients one after another. As a person of faith, Christian practice and teachings, like forgiveness and hope, have been essential parts of my journey with HIV.

All of this was in the back of my mind as I went to Amsterdam in July 2018 for Breaking Barriers — Building Bridges, the 22nd International AIDS Conference (IAC), to be part of an inter-faith chaplaincy team embedded among the 15,000 participants. I also attended Faith Building Bridges, an interfaith pre-conference.

The two previous IACs I attended were on my mind too: Berlin, 1993; and Toronto, 2006, where I carried The United Church of Canada banner on the local planning committee for the multi-faith pre-conference. Attending an international AIDS conference about once every decade makes me pause at the magnitude of the victories in the fight against AIDS.

This represents billions of dollars of commitment and an incredible mobilization of political will, like the implementation of the UN Millennium Development Goals, and civil society effort.

But what does it mean to attend an AIDS conference as a Christian? Far and away most of the participants — officially at least — are medical or social science researchers, political or NGO representatives, and activists. To many, religious people and institutions are seen as part of the problem because of hidebound ideas about sexuality, reproductive health, and moralistic attitudes.

The World Council of Churches-affiliated Ecumenical Advocacy Alliance (EAA) has been working hard to change the relationship between the Faith-Based Organizations (FBOs) and the secular HIV/AIDS movement for a decade and a half, since its first appearance in Bangkok in 2004. The interfaith EAA conference took place just prior to the IAC.

I was happy that contentious debates about the effectiveness of the ABC campaigns (Abstinence — Be Faithful — Use Condoms) at the 2006 EAA pre-conference have given way to discussion about getting tested, knowing one’s HIV status, and accessing treatment to achieve undetectable viral load. I was inspired to see Dr. Busisiwe Msimanga Radebe from the World Health Organization offer a hands-on demonstration of how easy and empowering it is for anyone — especially women — to use Canadian-made HIV self-test kits. She did this immediately following an inter-faith prayer service at the Keizersgracht Church in Amsterdam on the opening day of the IAC.

Other signs of changing attitudes include campaigns like “Real Men Know Their HIV Status” and “Undetectable = Untransmissible.” FBOs can encourage testing. Teaching and preaching in places of worship and church schools can support children with HIV to get on treatment and adhere to treatment regimens.

Professor Ruard Ganzevoort, Dean of the Faculty of Theology at the Free University of Amsterdam, encouraged FBOs not to be afraid to make the “faith” in FBO explicit and reach their grass-roots communities in ways that other NGOs might not be able to. “Make religion less dangerous and more constructive,” he said. “Bridges can be quite painful. Fences have been built for a reason,” he continued, challenging people of faith to actually build personal bridges by encountering people, making connections and taking the perspective of the other.

In many ways that’s what that next five days of the actual IAC were about. I often found myself hanging out the Interfaith Networking Zone in the Global Village as hundreds of conference delegates streamed by.  A gay francophone Muslim from North Africa stopped by to look for faith-based support in his work with men who have sex with men. A Palestinian refugee, newly arrived in Germany, asked for contacts with other queer Muslims in Germany. In both cases I was able to help them find appropriate connections.

One of the many workshops in the Networking Zone was a dialogue between youth and religious leaders from Central African Republic and the Democratic Republic of Congo. Both the youth and the priests agreed that there needed to be more open conversation about sexuality, reproductive health, and homosexuality, even if that meant going against official church teachings.

As the week progressed, I began to think of the IAC as a massive HIV/AIDS trades show. Activists, academics, bureaucrats, pharmaceutical representatives, people living with HIV/AIDS, doctors, artists, crafts people, entertainers, people of all faiths and of many genders and diverse sexualities had come together to tell their story or sell their wares – in some cases literally so – in the hope that by raising their voice, sharing their stories, or asking their questions they may contribute to the fight against AIDS.

With the WHO and UNAIDS goal of eliminating HIV/AIDS as a public health risk by 2030, my prayer is that I may have in some small way contributed to this effort.

— Ralph Carl Wushke attended the IAC 2018 and Faith Building Bridges with the support of the People in Partnership Program of The United Church of Canada. If you wish to invite him to present or preach to your faith community, please contact us. You may also wish to consult worship resources for World AIDS Day (December 1).

If this blog post piques your interest to participate in people-to-people opportunities with global partners we invite you to find out more at the People in Partnership webpage or by emailing us.