Look closely, and you can see it in the floors and wall in the second-floor foyer at the General Council Office. 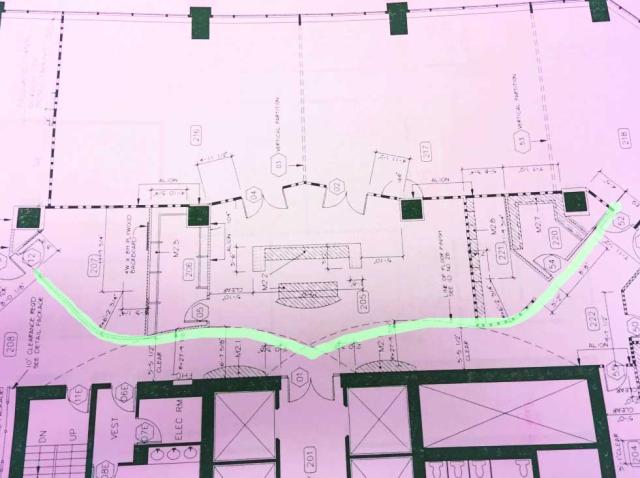 The floor plan for the second floor at Church House, done in 1994, shows how the walls curve in a dove-like sort of way.
Credit: The United Church of Canada
Published On: April 19, 2017

Doves have been an important symbol of peace for Christians since early biblical times. In 1944, when the United Church Crest was adopted, a dove representing “the Holy Spirit (Mark 1:10) whose transforming power has been a distinctive mark of Methodism” was placed at its peak.

Another dove — this one much harder to see — has been flying high in the main reception area on the second floor of the General Council Office in Toronto since 1995. Its design is so subtle that most people who work at Church House — not to mention the numerous visitors who come to the reception desk on that floor — have not noticed it. Look closely while standing in the foyer, though, and you can see how the walls are curved like dove wings, and the floor and ceiling have reliefs that follow that pattern

Twenty-three years ago, the task of designing the United Church office fell to Intercede Design of Toronto, and a designer who went by the initials “E.L.”. Lesley Melliship, a senior associate with Intercede, was involved with that work in 1994. Reached at her Toronto office, Melliship said the subtle dove design was not really intentional, but “came about serendipitously” as the firm created a reception area that was open and welcoming.

Intentional or not, the dove design will soon be lost in the redesign of the office space this summer. The entire second floor is being demolished to make room for an open-concept office that will accommodate Church House employees now scattered across two-and-one-half floors.

The Rev. Randy Naylor, Acting General Secretary for the United Church during the time the office at 3250 Bloor Street West was established, says he knew nothing about the dove design. “We did have a very creative design team working for us,” Naylor said, reached at Parkwoods United in Toronto where he serves. “That is why, in my humble opinion, the offices still look good today.”

Here at Church House, some long-term employees were asked about the dove design; few knew anything about it. Even the project manager (now retired) for the office move in 1995 had not heard about it.

A search through the church archives for information about the dove design also came up empty, though there were a few articles written about the new office. One was titled “The 3250” Era Begins, and was published in the March 1995 Observer. Written by the Rev. Peter Gordon White, it notes the new office is “not as west as some had hoped. But out of Toronto, yet still within the Metro Toronto Megalopolis of five million people.” (A 2017 Statistics Canada report finds the city has added one million new residents since then.)

This article mainly focuses on the joys, and troubles, Church House staff encountered at two previous locations. White notes that the office at 299 Queen Street West in Toronto was a “handsome, five-storey building … with a see-through elevator cage that struggled up slowly under the cautious control of a kindly operator named Albert.”

Staff then moved to 85 St. Clair Avenue East, a nine-storey structure the church owned. “For 36 years, all sorts of positive and negative emotions have swirled around ‘85’,” White states in this article. “Newspapers called it the church’s skyscraper on the hill, an exaggeration on both counts.”

In 1990, with church attendance falling and “85” badly in need of a costly retrofit, it was decided to look elsewhere, and a lease agreement was struck for the offices at 3250 Bloor Street West.

In 1995, staff were moved to “3250,” into an office tower that was part of the Mutual Group Centre. The church’s identity was still preserved, White wrote, as “a large United Church crest in the main foyer will make it evident to visitors that the church is the prime tenant.”

White is probably referring to the crest that once hung on the wall behind the reception desk on the main floor, where Berkeley Studio (and later the United Church Archives) was located. The studio, the reception desks, and the crest are all gone now (with the Archives relocated downtown).

With demolition slated for June, the dove on the second floor will soon also be lost, except in the memory of those who have seen its subtle curves.