Rev. Dr. Paul Douglas Walfall calls on White people in the church to put their love into action to counteract racism. 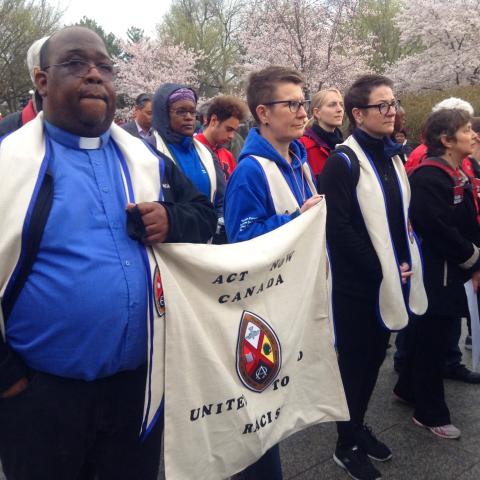 My friends, today I need you to make an intentional commitment to end racism. It is time for us in The United Church of Canada to reaffirm our commitment to bring racism to an end in our church, home, community, and nation. It is time for you to intentionally do everything in your power to promote the overall wellbeing of all people, irrespective of the colour of their skin or race. Let us make racism part of our past and not a part of our future together. It is past time for dismantling the systemic racism found in the very fiber and fabric of our society.

Consider the ways that you can put love into action as a means of counteracting racism. Remember that love in the Christian faith is more than an emotion; it is an act of will. When we love, we choose the highest good for those we love. This love is both transformative and revolutionary.

When you love you cannot accept it when another person is discriminated against or treated unkindly because of the colour of their skin. When you love, you treat every person with dignity, as all people are created in the image of God.

Racism is totally incompatible with the Christian faith. Confronting racism is an act of love. Love moves us not to turn a blind eye to racism when we see it. When we love, we make it an awkward experience for the person who is speaking racist language or showing racist behavior. When we love, we make it clear that jokes about race or unkind attitudes or actions are neither humorous nor beneficial for anyone in our society.

Racism must come to an end if we are a people who love! If this is to be done, then you have a very important role to play! Why? Because racism is not caused by the racialized people. When I say that racism exists, I am not calling White people racist; I am however reminding you that in one way or another you benefit from the racist systems which undergird much of the Canadian society. Racism is the fruit of White privilege and White entitlement. White privilege and entitlement are not only about those people who wear hooded robes, burn crosses, scream the “N” word, or spout racial hate. White entitlement is also about the ways in which White people are valued more than the non-White people in society. To be clear, I am not making a moral judgement about you by saying that our country is racist.

We can see racism in the society in which we live, and, in the ways, non-White people are treated. We see it in the ways that Indigenous peoples are sometimes spoken about in demeaning terms. It is seen when the worst is automatically assumed when we see Indigenous youth, for example, just hanging out on the streets. In many parts of our country, Black people are more likely to be stopped and carded by the police.

My own son has had the experience of being stopped by the police to explain why he was waiting to take public transportation. He was on his way home from school and was at the LRT station in Edmonton with two of his friends who attend the same college with him. His friends were White. He reported to me that the police came up to him and asked him for his identification and questioned him about being at the LRT station. They did not ask anything of his friends. As a father, I felt impotent and helpless to protect my son. It is painful as a father to know that he, and my other son, will continue to face these types of experiences simply because of the colour of their skin.

Let us also be honest racism is also seen in the church. A Black female colleague, for example, told me recently that a congregation member refused to shake her hand because he did not want a Black person as his minister. I have spoken elsewhere of my own experience of racists words spoken to me in the church. You see the experiences are real and yet all too often they are ignored or swept aside when we racialized people speak about them.

It is time for our church to affirm clearly that Black lives matter. Of course, all lives matter, but it is the Black lives that pay the price for anti-Black racism. Really, it is offensive for people to suggest that racism is not as bad in Canada as it is with our neighbours to the south. It is the height of willful ignorance for anyone to suggest that systemic racism does not exist in our country. These statements do not help Black people and they certainly do not help us confront the truth in our country.

We are past the time for easy answers and quick fixes. The way forward will require us to have awkward and painful conversations. Neither you nor I can avoid it. We who are Black, Asian, Indigenous, Latino, and non-White peoples will continue to fight against racism. Our task is to oppose racism, but only you can end it! For the sake of my Black sons and other non-White young people in this land, I am asking you to make this country a place where they and your children will be judged not by the colour of their skin but instead by the quality of their character.