The symposium on damaging theologies focused on the African context, but it was clear the North American church could learn much from the discussion. 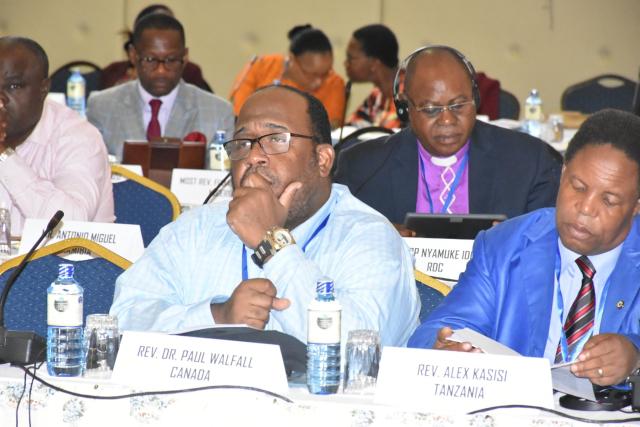 The primary reason I went to Kenya in October 2019 was to attend the first theological symposium of the All Africa Conference of Churches (AACC). The AACC is an ecumenical partner of The United Church of Canada. This first symposium was on the theme “Misleading Theologies.” I must confess that the theme intrigued me, and I wondered what misleading theologies were and what would be said about them.

The need for this topic arose from that the fact of various expressions of Christianity that have been exploitative and, in some cases, harmful and these have taken root in Africa. Examples of these misleading theologies are:

At times, it was difficult to arrive at a common definition on what is a misleading theology. Some questioned the usefulness of the phrase and suggested that consideration be given to “exploitive theologies.” Personally, it was difficult at times to make the demarcation between a misleading theology and a different theological perspective; for example, as seen in the differences between conservative and liberal theologies, and established churches and African indigenous churches.

Ultimately, it was determined that misleading theologies would be understood as theologies that “undermine the sovereignty of Christ, fundamental biblical doctrines, and sound theological ethos; but evidently exploit and violate the God-given dignity of vulnerable Christians” (AACC, Statement from the Symposium).

The symposium therefore sought to look clarify the realities facing the church and to discuss possible ways of dealing with them. The symposium addressed the issues under four themes.

The United Church’s own Rev. Dr. Japhet Ndhlovu, Program Coordinator of Southern Africa and South Asia Partnerships at the General Council Office, participated in the symposium by offering a presentation in the Power and Authority topic.

Among the many points made during the symposium, two stood out for me. The first was the need for members of the church to know the content of their faith. The need to know the faith is important if persons are to defend or explain faith it in the midst of different perspectives. It raised the important place of faith formation in the life of the church as a whole, and in the community of faith in particular. What we do as people of faith should be grounded in something; and knowing the contours of that something is important.

In this regard, it was accepted that faith healing has a legitimate place in our Christian faith. However, we noted that the role of doctors and others in the medical sciences do not contradict this belief, if nothing else they are legitimate expressions of healing in the context of our faith.

While the symposium focused on the African context, it became clear to me that the North American church could learn much from the discussion. Indeed, I wondered if we needed to have our own dialogue to look at some of the expressions of the Christianity which have been accused of being detrimental to the value and dignity of the human person. We already have the history of the Residential Schools in Canada, which to my mind was undergirded by a misleading theology. I could also talk about the ways in which the Christian faith supported and promoted active and passive racism. Included in this could also be discussed the ways in which the Christian faith has continued to promote the sexism, homophobia, ableism, and discrimination against non-European cultures. We may also need to look at the models of ministry which we have accepted which focus on bureaucracy and not on servanthood. A discussion on misleading or exploitive theologies in our Canadian may be useful for the Body of Christ.

In some ways these discussions have already started. I pray that we will find ways to continue with honesty and integrity.

—Rev. Dr. Paul Douglas Walfall is the minister of the Fort Saskatchewan Community of Faith in the Northern Spirit Regional Council. He travelled to Kenya in October 2019 to attend the All Africa Conference of Churches symposium on “Misleading Theologies,” and to visit United Church of Canada partners in the region.