Chaplain among those Lost in Normandy 75 Years Ago

United Church minister, Rev. William Alfred Seaman responded to the call “Follow me” as a chaplain during World War II, serving as a sign of God’s presence in a broken world. 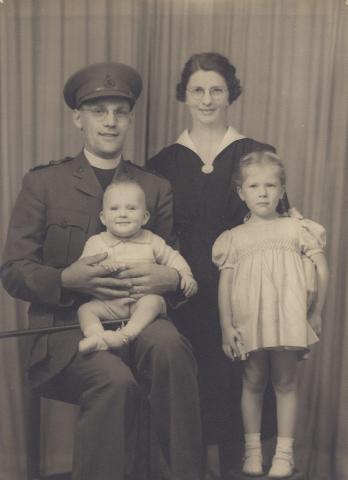 Shortly before leaving Nova Scotia, Rev. William Alfred Seaman had this portrait taken with his wife Louise and their children. Padre Seaman carried it with him always.
Credit: Courtesy of the Seaman Family
Published On: June 6, 2019

On the base of one of the 2048 burial markers in the military cemetery located in Bény-sur-Mer, France, these familiar words from the Apostle Paul may be found. “And now abideth faith, hope, love, these three but the greatest of these is love” (1 Cor. 13:13).

They are etched on the gravestone of Honourary Captain, the Rev. William Alfred Seaman, a United Church minister, who is buried beside some of the fallen soldiers whom he himself buried.

Padre Seaman left his congregation in River John, Pictou County, Nova Scotia to serve with the Canadian Chaplain Service during World War II‎. He and the soldiers of the 5th Field Regiment arrived in France just after D-Day in 1944.

As a chaplain, he could often be found working alongside the Medical Officer at the Regimental Aid Post, assisting stretcher bearers and bandaging wounds—those both seen and unseen—and above all, bringing a sign of God’s presence in a broken world.

On July 14 while rushing into battle to retrieve wounded soldiers during the Battle of Caen, he was struck by an exploding mortar shell. The shrapnel pierced his leg, side, and head. He died of an infection a week later, on the date of the tenth anniversary of his marriage to Louise. Together they had two young children at the time, Lorna and Andrew.

Today, as Canadians remember the sacrifices made by so many on the shores of France 75 years ago, we remember Padre William Alfred Seamen, whose response to Jesus' call to "Follow me," led him to a distant shore, and who lies now at rest among those whom he served to the very end. His gravestone reminds us still of God’s enduring presence and promise of a life which abides, even in the valley of the shadow of death.