"My minister ... suggested that I enter ministry. At first glance I thought he was out of his mind. After much prayer and reflection ministry called me with the holy sledge hammer." 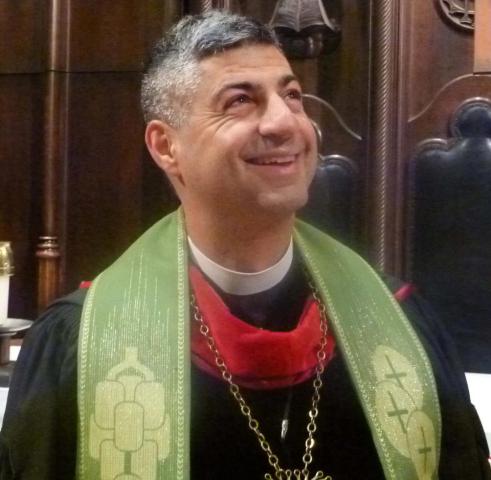 I first heard the call to ministry in January 1984 while studying Chemistry at the University of Toronto. I was very active at Alderwood United Church; as elder, in the choir, teaching Sunday school and a member of the Worship Committee. I had a crisis of vocation. My minister at the time, the Rev. Harold Modle, first suggested that I enter ministry. At first glance I thought he was out of his mind. After much prayer and reflection ministry called me with the holy sledge hammer.

Good question. I was first baptised Roman Catholic, then Anglican, dedicated Baptist. Faith was always real in my life. The United Church chose me. We had stopped attending church for five years from 1973 to 1978, my sister wanted to get married, I had an uncle and aunt attending Alderwood United. My mother, father, and myself began attending Alderwood United. They had an excellent youth program and were launching a production of Godspell while simultaneously the confirmation class began. You could say the planets aligned in the universe.

The people with whom I have served. The building of trust and relationships in an infinite range of contexts. This applies for ordained ministry and chaplaincy.

In my first 10 years of ministry, being a closeted gay minister. I heard the call to be authentic and the door to Affirming Ministry at Metropolitan United opened. As a Police Chaplaincy, learning the language and context of the Toronto Police Service.

I would ask them, have you tried to not hear the call? If the answer is yes and the call persists, then there is the affirmation.

Any other comments about your ministry and vocation?

The visions of my head as I lay in bed were these: I saw, and behold, a tree in the midst of the earth, and its height was great. The tree grew and became strong, and its top reached to heaven, and it was visible to the end of the whole earth. Its leaves were beautiful and its fruit abundant, and in it was food for all. The beasts of the field found shade under it, and the birds of the heavens lived in its branches, and all flesh was fed from it.