"So often we all get caught up in the bottom line... When we do that, we forget that we are ... children of God, and God is constantly speaking to us through a variety of means." 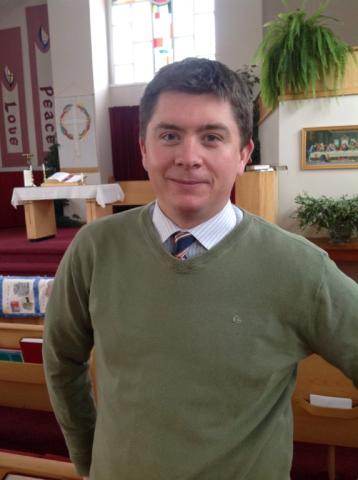 I most certainly have always felt at home within the United Church. Like many others during my childhood and youth, I spent a great deal of time involved in Sunday school, youth groups, anything and everything I could do at church. I also spent time during my summers attending and working at United Church camps. I think the first time I knew I was called to ministry, was when the minister in my home congregation (Rev. Brain Walton) literally tapped me on the shoulder and said, “Have you ever thought about becoming a minister?” When he first asked me that question I, for the most part, just said, “yeah, no thanks,” and carried on; but the question always remained in the back of my mind.

When I was 21 years old my mother died due to the complications of a car accident and, having experienced her life and death, that question within me about ministry moved from the back of mind to the front. My mother had a really beautiful way of always finding hope no matter what situation she was in and it occurred to me that that is what faith is all about; finding hope no matter what. I wanted to share that hope that I had experienced with others and so days after her death I found myself in my minister’s office saying, “Okay, I have thought about ministry, and my answer is yes.”

I guess quite specifically because it was home for me, but as I went through my discernment and training for ordination, it became very clear that the United Church was living out an ethos that I wanted to be a part of. For example the inclusive nature of the church, the value given to hope and grace, the focus on what brings life in the now, instead of what we need to do to earn new life later, all these facets of United Church theology and practice greatly influenced my understanding of why the United Church was home and thus has remained my home.

I would say the privilege that ministers are given to walk with people through the most significant moments of their lives. Ministers are invited, even encouraged, to share in the most personal of times. I have been invited to meet with families moments after their babies were born; I have helped celebrate graduations, weddings, anniversaries, and retirements. I have also been with families as their loved ones have taken their final breaths. I have been made a part of so many different people’s lives, some whom I have known for years, others who I just met. For me then the greatest part of entering into ministry has been the honour and privilege I feel for being welcomed to share in all these different moments.

First off I really like this question, because it would be false to say that every day of ministry was a click-your-heels, sing-on-the-street-corner kind of day. Each day is different; some are inspiring some leave you really tired. Right now for me, the biggest challenge in ministry is finding life-giving moments in the congregational ebb and flow, when there are so many worries about money and lack of people in the pews. I came into ministry with a significant amount of hope, but dealing constantly with the questions and anxieties around how to keep the doors of the building open has been a great challenge. Part of that challenge is finding a way to share a vision of what could be, in the face of what is and what has always been.

First off I would say listen to your call and always be open and honest about who you are. Don’t try to be what you think you should be, or what you are told a minister should be. Be yourself, of course learn and grow, but always remember who you are.

Secondly, I think I would have to say that by entering into ministry at this time, you will be entering into a church that is in an incredible state of flux. Some of it will work, much of it will not, and so I think you really need to live this call—because if it’s just a job, you will be overwhelmed very quickly in the bureaucracy.

Thirdly, ministers need to have hope and be able to recognize God’s grace in the everyday moments. So often we all get caught up in the bottom line, or the fear of what will be; so often we find ourselves arguing about interpretation of this or that. When we do that, we forget that we are God’s people, children of God, and God is constantly speaking to us through a variety of means. As ministers, but also as people of faith, we need to be able to move beyond the worries, arguments, and anxieties of where we’re headed and in the everyday moments hear God’s voice, seek God’s grace, and live the life we were called to live.