We repudiate the Doctrine of Discovery, which asserted that lands belonged to the Christian powers that “discovered” them. 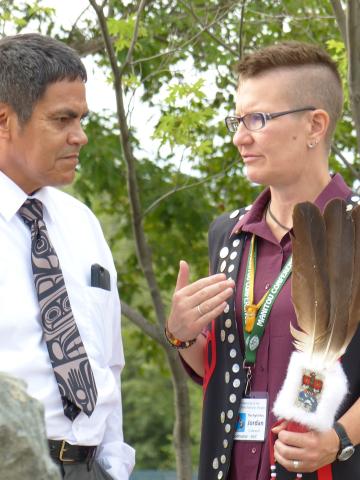 What is the Doctrine of Discovery?

The Doctrine of Discovery, a legal framework that justified European imperial ventures around the world, including the colonization of North America, has its roots in a series of Papal statements dating back to the 15th century. For example, read the Papal Bull Inter caetera of 1493 on the Encyclopedia Virginia website.

Given the passage of time, and the shifting of religious affiliation, you might think that it is an archaic principle, with little bearing in contemporary law and society.

Yet the Doctrine of Discovery, which asserted that lands belonged to the Christian powers that “discovered” them (and the related concept of Terra Nullius, which held that those on the land prior to European arrival merely occupied it without any right or title), continues to reverberate in the 21st century. As the Truth and Reconciliation Commission (TRC) noted in its final report, the Doctrine of Discovery has been cited in decisions of the Supreme Court of Canada as recently as the 1990s.

Why is it still relevant?

The Doctrine of Discovery has profoundly affected the way that Indigenous peoples have been perceived by non-Indigenous peoples. The TRC’s final report observed that it rested upon the belief that “the colonizers were bringing civilization to savage people who would never civilize themselves” [Canada’s Residential Schools: The History, Part I: Origins to 1939, p. 18]. That perception, in turn, defined our relationship, culminating in the establishment of residential schools and the legacy that continues to play out today.

Consequently, a key recommendation of the Truth and Reconciliation Commission, articulated in a number of its Calls to Action, is the repudiation of the Doctrine of Discovery.

How can we respond?

The United Church of Canada repudiated the Doctrine of Discovery in 2012 (further information can be found in the Downloads, below), as did the World Council of Churches. This was one step in our long journey of listening, repentance, and the building of right relations that began with the 1986 Apology to First Nations Peoples. Now we must examine what it means to live it out.

Worship, background, and study resources are being developed. See Downloads, below.

In this 150th year of Confederation, United Church communities are encouraged to use the Living on the Path of Respect worship service, during Lent, on Victoria Day weekend, or on June 11, the anniversary of the federal residential schools apology.

You may also wish to view these two videos on the topic: