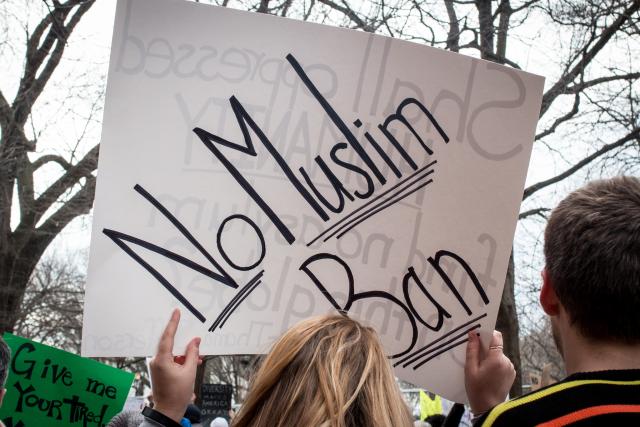 Affirming that God is at work in the religious life of all humanity, the United Church is committed to working with all people of goodwill for compassion, peace, and justice in the world. Together with our full communion partner the United Church of Christ (USA), we respond with outrage and sorrow to the recent US Supreme Court decision upholding President Trump’s executive order barring people from several Muslim-majority countries from travel to the United States.

When Jesus named welcoming the stranger as one of the characteristics of those who are faithful followers of his way, he spoke of a gathering of nations. This recent decision demonstrates once again that racism and Islamophobia practised by individuals and nations continue to destroy God’s beloved community.

United Church of Christ leaders say that this “travel ban is a signal that we are closing the door to our neighbors who are fleeing violence and persecution, and that our faith calls us to do otherwise.” As part of our commitment to racial justice, The United Church of Canada is called to speak against discrimination rooted in racial and religious bigotry. Indeed, the recent travel ban decision has been criticized as the US Supreme Court once again legitimizing and legalizing racism.

International interfaith organization Religions for Peace expressed its sorrow and moral opposition to the Supreme Court ruling, calling all people of faith to “welcome the other.” “Each of our diverse faith traditions calls for profound active solidarity with, and empathy for, the ‘other’ rooted in a spirit of unity, as a deeply held and widely shared value among our religious communities,” states the organization.

Religions for Peace has joined with a global coalition of faith leaders (including the World Council of Churches, of which the United Church is a member) in the Faith over Fear campaign, an initiative which invites people of faith to “welcome the other” by opening their hearts and communities to refugees.

Although Canada’s refugee sponsorship programs have supported people of many faiths, Canadians are not immune to these global currents of fear and distrust of “the other,” or to underlying racism and Islamophobia. Recent responses to asylum-seekers entering Canada from the United States; hate crimes attacking individuals and their places of worship; increasing numbers of visa refusals for those coming to Canada from the global South—all point to a Canada less welcoming than our faith envisions. Recently the Canadian Council for Refugees, Amnesty International, and the Canadian Council of Churches (of which the United Church is a member) filed a court challenge of the safe third country agreement between Canada and the United States, through which refugee claimants cannot legally enter one of these countries from the other.

Choosing faith over fear requires us to denounce all actions that violate on the basis of race or religion. As people of faith, we must denounce that which violates the human rights, dignity, and very life of those around the globe who seek refuge from war, poverty, or climate devastation, and of those who simply seek to travel or work in a different part of the world.

We are called to work with Canadians of all faiths for immigration systems that "welcome the other" and contribute to communities that are just and inclusive,‎ honouring diversity as a gift for all. Consider exploring the stories of hope and welcome on the Faith over Fear website. Or share this statement on your social media networks with the hashtag #NoMuslimBanEver.