“In grateful response to God’s abundant love, we bear in mind our integral connection to the earth and one another; we participate in God’s work of healing and mending creation.” (A Song of Faith) 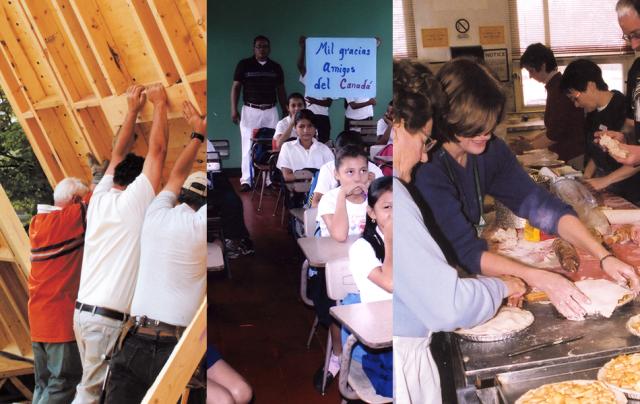 Caring for one another was central to Jesus’ teachings: Feed the hungry, satisfy the thirsty, shelter the homeless, clothe the naked, care for the sick, visit those in prison. Moreover, he announced that God’s kin-dom of peace and justice is at hand, and challenged structures of discrimination and oppression.

Jesus announced the coming of God’s reign—
a commonwealth not of domination
but of peace, justice, and reconciliation.
He healed the sick and fed the hungry.
He forgave sins and freed those held captive
by all manner of demonic powers. (A Song of Faith)

We believe that we strengthen one another to work, through God's grace, for a better world. To this end, we cooperate with other churches, faith traditions, and people of goodwill to eliminate poverty and injustice, identify its root causes, and protect those who are most vulnerable. Throughout Africa, Asia, Latin America, and the Caribbean, as well as in our own country, the United Church works with churches and organizations we call partners by supporting work they see as vital to their well-being. This enables us to go far beyond our normal reach in responding to injustice.

We sing of God’s good news lived out,
a church with purpose:
faith nurtured and hearts comforted,
gifts shared for the good of all,
resistance to the forces that exploit and marginalize,
fierce love in the face of violence,
human dignity defended,
members of a community held and inspired by God,
corrected and comforted,
instrument of the loving Spirit of Christ,
creation’s mending.
We sing of God’s mission. (A Song of Faith)

The United Church has been active in the public arena since its earliest days. The founders of this church believed that ours is a living faith and a witness to the ministry of Jesus Christ that is expressed in active, thoughtful involvement in society. The combined voices of people of faith bring forward the message that every individual, and Earth itself, must be cherished and respected.

To get involved in timely justice initiatives, visit our Social Action section.

The United Church has developed a large body of statements, study documents, and policy related to social, political, and ecological issues. These resources speak of how to live out our faith in light of the challenges the world faces at any given time. For example, One Earth Community (1992) recognizes God's call to live in harmony and draw on the Earth's sustenance responsibly; Mending the World (1997) offers an ecumenical vision for healing and reconciliation; To Seek Justice and Resist Evil (2000) explores steps toward a global economy in the service of all God’s people; in 2006, the increasing domination of powerful nations and organizations was expressed in the title Living Faithfully in the Midst of Empire.