Trafficked by Her Aunt: Lakshmi’s Story

Human trafficking is a burgeoning crisis in India, where an estimated 20‒65 million people are exploited. 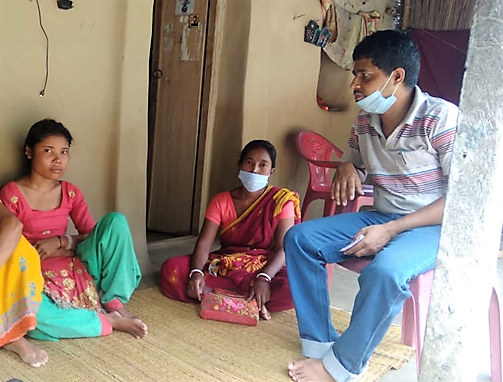 Lakshmi, on the left, is safely returned to her family.
Credit: Diocese of Durgapur
Published On: December 8, 2020
Body

Lakshmi, a teenager from West Bengal, India, went missing from her family home just a few months ago. Struggling to survive, Lakshmi was trafficked by her aunt, who promised that she could earn money and become independent by “dancing.” Thankfully, Lakshmi’s parents contacted the Diocese of Durgapur, which runs an anti-human trafficking program supported by your Mission & Service gifts. The Diocese intervened, and on the threat of legal action, Lakshmi’s aunt returned her to her parents.

Human trafficking is a burgeoning crisis in India, where non-government organizations estimate that 20‒65 million people, especially women and girls, are exploited.

Girls like Lakshmi are typically trafficked to be sexually exploited or forced into marriage. But they are also trafficked for labour and even for organ harvesting. Sometimes their own families traffic them. Other times, girls are taken by complete strangers, who often hunt for victims in places where it’s easy to poach them.

Around the world, human trafficking is one of the fastest-growing criminal enterprises because it is relatively low risk and has a high profit potential. That’s because, unlike drugs, humans can be sold repeatedly.

The pandemic has made the problem even worse, especially in parts of the world where the economy is suffering because of the COVID-19 crisis.

“The pandemic has had many repercussions in India. Migrant labourers all over India have lost their jobs, and many have died trying to reach home for the lockdown. The economy took a hit with the largest drop in GDP of 23.9 percent. Every time India faces a crisis, there is a rise in trafficking in the country,” explains Raja Moses, a program coordinator with the Diocese of Durgapur.

Your gifts through Mission & Service are making a difference. In partnership with the Diocese of Durgapur, your support helps the anti-trafficking unit find and free women and children who are being trafficked. Once they are freed, your gifts help victims seek justice for what they have been through and regain a sense of worth and acceptance. Your generosity is also preventative, helping provide the education that is needed to offer protection against predators.

With your help, young women like Lakshmi have a second chance at freedom, and families like hers can get their children back safely. Now, more than ever, the world needs your generosity. Thank you for your gifts through Mission & Service.