“It took eight years to get where God had been calling me.” 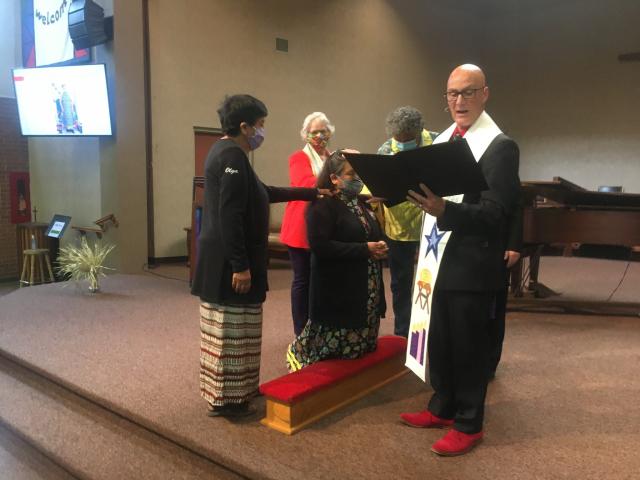 Deb Anderson-Pratt is presented with the eagle feather at her ordination ceremony.
Credit: Kent Stewart
Published On: December 8, 2020
Body

Growing up, Deb Anderson-Pratt would never have imagined that she would become a minister. A Cree/Saulteaux residential school survivor, Deb disliked the church for many years.

“I grew up living on the George Gordon First Nation reserve. Religious leaders visited us all the time to try to convert us. One of them told my great-grandmother, MaryJane Anderson, that we were all going to hell because of the Native teachings she was giving us.”

Deb has vivid memories of the day a group of ministers were at her great-grandmother’s home for a meal. An argument broke out about whose theology she should pass along to Deb and the other children: “We used to have a tent down the hill from our house. My grandmother told them to go to the tent and discuss whose teaching was right, and if they could agree, she would teach her children that. Needless to say, no one came back.”

Deb’s great-grandmother struggled to maintain her belief in both the traditional Indigenous teachings and the biblical ones, turmoil that was instilled in her at residential school. “She was taken to residential school when she was just four and was forbidden to mention, much less live out, traditional teachings. She shared them with me kind of in secret. She had to be subtle about it because if she got caught, she could go to jail,” says Deb.

How did Deb become a minister? In the late 1980s she took a job as a secretary in a Lutheran church, and the minister encouraged her to answer God’s call. She began studying but at that point wasn’t ready to become a minister. Still, she continued to be involved in the United Church’s All Native Circle Conference and eventually, in 2012, began to feel the Spirit pull her toward ministry again.

The exact time she responded to God’s call is etched in Deb’s heart. It was September 14, 2012. Deb had quit her job to look after her ill sister, whose bed she was changing. “I sat down and I said, ‘Sister, I have this strong call. God is calling me to train [for ministry] again.’ My sister had tears in her eyes and said, ‘I think you need to answer the call.’” Deb contacted the Sandy-Saulteaux Spiritual Centre to re-enroll.

The following October, Deb’s sister died. “I found I wasn’t angry at God for taking her. I knew God had used her for a channel to get me where I needed to be,” she says.

In fall 2020, Deb was one of six Indigenous ministers ordained or commissioned in the United Church. “I cried when I was ordained. It took eight years to get where God had been calling me.”

Since 2016, Deb has worked for the Regina Native Outreach Ministry. Today, she is working hard to help purchase a building. “Our people will not go to a mainstream church. We have very many lost people in the community, especially in the core area, and we want a place where they can come and feel safe. That’s our dream.”

Your generosity through Mission & Service supports the Sandy-Saulteaux Centre in Manitoba, where both Indigenous and Christian spiritual beliefs are respected, shared, and understood―where Indigenous leaders like Deb answer God’s call to a ministry of healing and hope.