"It is life giving, fun, creative, and blessed to show people how God is at work in their lives." 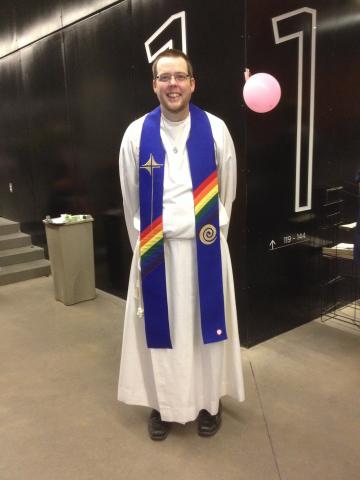 I knew I was called to ministry from an early age, around 16/17, but I didn’t believe that call until later in life when I had seen how God had given me the tools that I didn’t think I possessed to be in ministry. I was terribly afraid of public speaking, but through my other life experience was given the gifts needed to overcome that fear. So the next time God came knocking when I was 28, I wasn’t able to use that as an excuse, and started on this journey. My journey also had a door closed and window opened kind of feel to it. I was trying to get into teachers college, and wasn’t able to, when I realized I was being called to be a teacher, just in a different way. Which is one of the reasons I chose diaconal ministry with its focus on education.

Being allowed into people’s lives at their most tender, either for happy or sad reasons, and being trusted to share in their experiences and walk with them and God in their life journey.

Balance. It is a profession where there is always more that can be done. Creating the sacred space, and the ability to acknowledge saying “no” as a spiritual practice.

I would ask them why? What is it about ministry that they feel called to. Then I would tell them to take the Leadership Development Module from the Centre for Christian Studies. I found if I had any doubts at all, that course and the leaders of that school shored up for me that this is what I was being called to do.

Any other comments about your ministry and vocation?

It is life giving, fun, creative, and blessed to show people how God is at work in their lives.