Gratitude Is in the Air as Churches Honour Frontline Workers 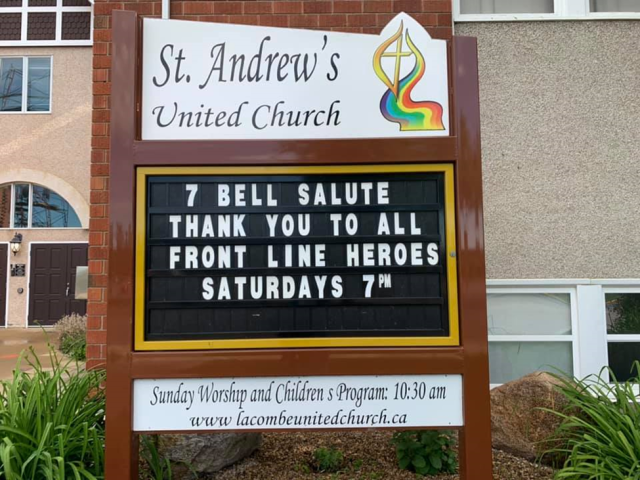 Gratitude is in the air. Literally. From signs and social media posts to homemade thank-you cards, United Churches across the country are finding inspiring ways to express appreciation to frontline workers. Some are turning up the volume to express thanks and inviting neighbours to join in to make a joyful noise. Uniting people around gratitude—a key component of stewardship—is one way congregations are living out their call to be the church.

In the early days of the pandemic, Windermere United Church in Toronto kicked off a social media campaign to honour frontline workers, posting photos of their members holding thank-you messages. They also rallied the community to bang pots in appreciation during the shift change at the hospital. So far, no one has complained about the noise.

"We've had many frontline workers (nurses and others) tell us how grateful they are to hear the noise, especially as the shift changes around the hospital and people are facing the unknown at the start of the shift or exhausted from what was a long shift. The police did a drive by with lights flashing on our street as we banged pots one of the nights," says Alexa Gilmour, the church's minister.

More traditional notes of appreciation ring in the air as congregations sound their church bells to honour frontline workers.

Every Saturday night at 7 p.m., St. Andrew's United Church in Lacombe, Alberta, rings their bell seven times to thank health-care workers. Until businesses opened up in Guysborough, Nova Scotia, all of the community churches rang their bells in unison each Wednesday night to express gratitude. One day early on in the pandemic, community members gathered in Bishops Mills, Ontario to ring bells of every shape and size for a full half-hour; the church's bell sounded at the end.

For Walter von Boetticher, ringing the bell at Birchcliff Bluffs United Church in Scarborough, Ontario, is not only a gesture of community support, it's also deeply personal. His mother (now deceased) took the lead on raising funds for the bell, which was originally rung to signify a hope for peace. Over the years, the bell-ringing slowly tapered off as interest waned; it had been silent before the pandemic struck.

"I think of my mother and frontline workers when I ring the bell," says von Boetticher, who is now one of many volunteers among the church and wider community to leap at the opportunity to show support in this way. While some neighbourhoods might not appreciate the noise, von Boetticher says the neighbours around Birchcliff Bluffs have been appreciative. "One of the members of the community left a rose at our door to thank us for ringing the bell. It's been a unifying gesture. The main function of churches is to be a meeting place," says von Boetticher who recently started attending church again. "There's something about having the bell ring every night that connects the community."