As the grandmothers told their stories, they felt more and more confident in their knowledge and experience. 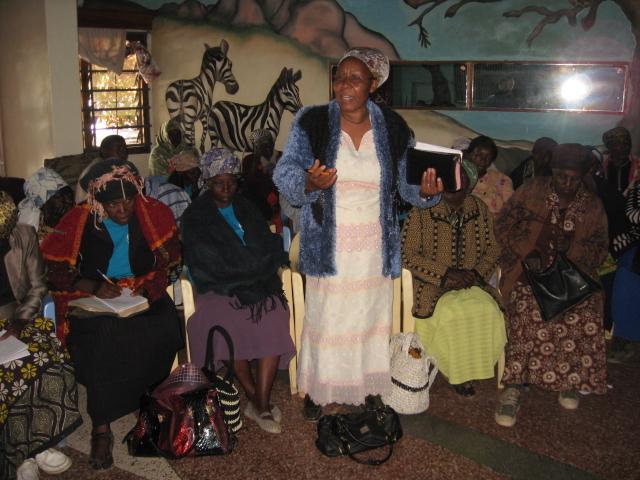 A grandmother who is raising her grandchildren after her children died of AIDS tells her story.
Credit: World Council of Churches Ecumenical HIV and AIDS Initiatives and Advocacy
Published On: December 8, 2020
Body

In Kenya, 1.5 million people live with HIV. In the Rift Valley of Kenya, 7 percent of the people who live there are HIV positive. That’s roughly 892,707 people. Sadly, the grandmothers whose children have died of AIDS are often left alone to care for their grandchildren. To add insult to injury, their church community condemns them.

Why? Because some pastors who don’t know the facts about HIV believe and teach that faithful Christians cannot contract the disease. They think HIV is a result of sexual sin and that it’s a judgment from God for sexual immorality—a disease for sinners.

“The pastors had little information about HIV and AIDS; to them, and others in the community, it was a strange disease. Their theological interpretation of the disease was based on the way they read about the incurable diseases mentioned in the Old Testament. The pastors said that they had believed and taught that a believer in Christ cannot contract HIV—that HIV is a disease for sinners. HIV was a result of sexual sin and was a judgement from God for the sexually immoral,” write Esther Mombo, regional coordinator of the World Council of Churches Ecumenical HIV and AIDS Initiatives and Advocacy, and Pauline Wanjuru, lecturer in the faculty of theology and director of partnerships and alumni relations at St. Paul’s University in Limuru, Kenya.

With support from your Mission & Service gifts, Mombo and Wanjuru led a series of workshops in one Rift Valley community that has been hit especially hard by HIV/AIDS. The workshops invited grandmothers and pastors to meet and discuss the nature of the disease and the stigma around it.

One grandmother who attended the workshops was 70 years old. She had lost both her daughter and her son and was left to raise three grandchildren on her own. Instead of stepping up to help, her neighbours refused to visit her because they said her daughter and son had been sexually immoral. Her pastor wouldn’t even attend her children’s funerals because he didn’t want to be seen associating with her family. When she went to church, the pastor preached about the punishment for sexual immorality.

At the workshops, this woman bravely told her story to the pastors who attended. She also shared with them how it felt to be shamed for loving her children and grandchildren. Another grandmother explained that her grandchildren were born with the virus and thus couldn’t have been involved in any sexual immorality. Yet another spoke of God’s love for everyone.

As the grandmothers told their stories, they felt more and more confident in their knowledge and experience. The pastors learned more about the disease and made a commitment to extend compassion and offer pastoral care to the grandmothers. For these pastors, the experience was a true epiphany.

Beliefs inform actions. How we think affects what we do. All of us know from our own life experience that when we know better, we do better.

Your Mission & Service gifts support people around the world in speaking their truth so Christ’s light of love can shine in all we think, say, and do. Thank you for your faithful support.