Wet’suwet’en and the Right to Free, Prior, and Informed Consent 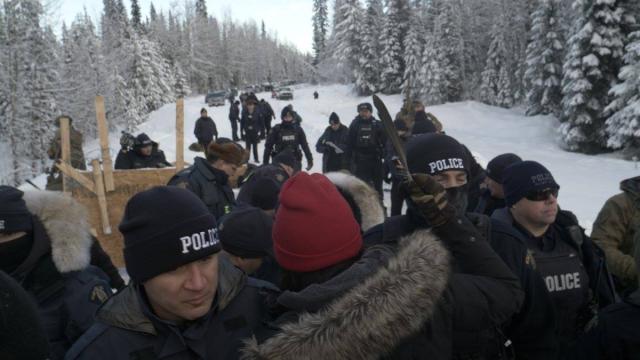 Until this country is willing to listen to their own Supreme Court and recognize hereditary rights and title, these unresolved issues will continue to end in confrontation. The only way forward is for government and industry to follow the principles of UNDRIP and to work with both hereditary and elected leadership. But as long as they are willing to resort to force instead of diplomacy, we haven’t even begun to engage in meaningful reconciliation.
—Cary Newman[1]

In late 2018, conflict over who has the right to make decisions about energy projects on traditional Indigenous territories reverberated across the country from the locus point of Wet’suwet’en territory in northern British Columbia.

While Wet’suwet’en First Nation had given its approval to the CGL project, the hereditary chiefs of its five clans had not. Under the terms of the Indian Act, Chief and Council have jurisdiction only over lands on reserve—not on the entirety of the traditional territory. Citing the UN Declaration on the Rights of Indigenous Peoples, the hereditary chiefs maintained that their right to free, prior, and informed consent was not being honoured.

On January 7, 2019, the RCMP, highly armed and in tactical gear, moved in to take down the barricades and arrested 14 demonstrators. Indigenous leaders across the country questioned how such action could be squared with Prime Minister Trudeau’s frequently quoted statement that no relationship is more important to his government than that between Indigenous and non-Indigenous peoples. A letter from Moderator Richard Bott was one of many solidarity actions by Indigenous and non-Indigenous peoples across the country.

A year later, the Supreme Court issued another injunction, and the RCMP established an “access control checkpoint” on Wet’suwet’en territory, which Wet’suwet’en land defenders resisted. The chiefs have asked for a meeting with BC Premier John Horgan, but this has yet not been granted. This is of particular concern given the BC legislature’s recent passage of Bill 41 to harmonize all provincial law with the UN Declaration on the Rights of Indigenous Peoples.

Solidarity actions once again broke out across the country. In Victoria, a group of Indigenous youth and others occupied government offices. Our partner KAIROs has issued this statement of support.

The ongoing situation on Wet’suwet’en territory reveals, at many levels, how settler society fails to understand and accept the Indigenous right to self-determination. It demonstrates an acceptance of unbalanced power relationships, and calls into question Canada’s commitment to reconciliation with Indigenous peoples.

How we, as a country, respond to development issues on unceded and treaty lands will speak volumes about our commitment to reconciliation, to living together as settler and Indigenous peoples in Canada. As Moderator Richard Bott has written in his prayer for Wet’suwet’en, “We speak, God of all Creation—but are they just pretty words?” He urges us to “open our hearts with truth to the fact that these actions give lie to our words.”

The United Church of Canada is committed to the UN Declaration on the Rights of Indigenous Peoples, which holds that Indigenous Peoples have the right to free, prior, and informed consent before any development occurs on their territory. We believe this must be fully respected on Wet’suwet’en land, and on all Indigenous territory in Canada.

What Can You Do?

Not just in the Wet’suwet’en case but in all cases where economic development comes into conflict with Indigenous peoples’ rights to self-determination and to free, prior, and informed consent, please take the time to:

Send your letters and e-mails to:

The Honourable Carolyn Bennett
Minister of Crown-Indigenous Relations
House of Commons
Ottawa, ON  K1A 0A6
aadnc.minister.aandc@canada.ca

Send copies of your letters and e-mails to: