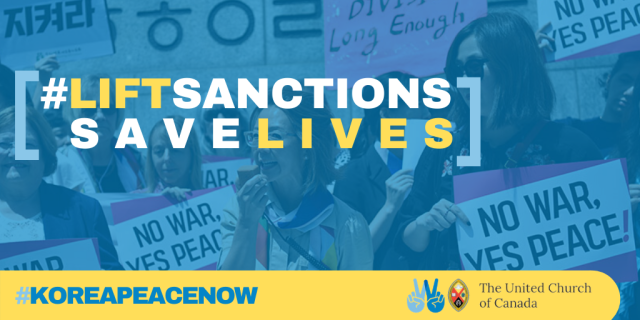 God of wonder,
Comfort those who have been suffering from the division by foreign powers for over 70 years.
We ask you to restore the broken Korean Peninsula.
—from Prayer for the End to the Korean War and Peace on the Korean Peninsula by Dr. Un Sunn Lee

2020 marks 70 years since the start of the Korean War in June 1950. While it no longer consists of active fighting, hostilities remain high, resulting in extreme militarization on the Korean Peninsula. These decades of division keep families painfully separated, prevent the most vulnerable from accessing humanitarian relief, and are a barrier to God’s peace in the world.

Canada has enacted unilateral sanctions against North Korea (the Democratic People’s Republic of Korea, or DPRK). In the context of COVID-19, these sanctions halt the delivery of much needed humanitarian aid, affecting especially women, children, the elderly, and people with disabilities. Even when granted exemptions, humanitarian agencies experience continuing delays.

Lifting Canada’s sanctions against the DPRK would save lives. It would also advance diplomacy and engagement with North Korea, which is vital to ending the decades of hostility and bringing lasting peace to the Korean Peninsula.

The United Church is part of Korea Peace Now! Women Mobilizing to End the War, a global coalition of women’s peace organizations calling on the United States, North Korea, South Korea, and China to end the Korean War, sign a peace agreement, and include women in the peace processes. Join the United Church in this growing movement of individuals and organizations working for lasting peace on the Korean Peninsula.

In the Sermon on the Mount, Jesus preached to the crowds and taught them that “blessed are the peacemakers, for they will be called children of God.” (Matthew 5:9). Throughout his ministry, Jesus reminded people of the need to pursue peace. The United Church’s A Song of Faith reflects that:

Jesus announced the coming of God’s reign—
a commonwealth not of domination
but of peace, justice, and reconciliation.

As disciples of Jesus, the people of the United Church can take action locally to move towards peace in Korea. We can join with partners in Korea—and the global ecumenical family—in a continued commitment to promote engagement and dialogue, challenge sanctions, work toward a peace treaty to end the Korean War, and strengthen the global movement to build peace, not conflict.

The United Church of Canada has engaged with the people of Korea for close to 120 years, supporting their desire for health, education, training, independence, democratization, and human rights. Today, the church continues to work with partners in efforts for reconciliation and reunification between North and South Korea.

Send your letters and e-mails to:

Send copies of your letters and e-mails to: