Posted in
Reconciliation and Indigenous Justice
Mining and Resource Extraction

Show your support for the rights of Indigenous peoples to participate in decision making and to free, prior, and informed consent. 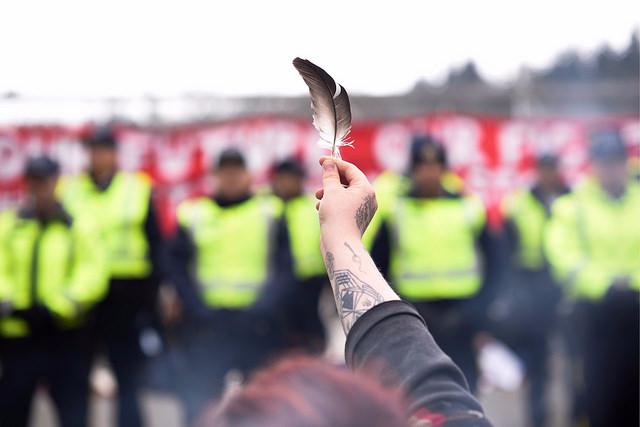 A scene from the front gates of Kinder Morgan’s construction site on Burnaby Mountain, BC.
Credit: Rogue Collective

While the debate about Kinder Morgan’s Trans Mountain pipeline reveals many fault lines in Canadian politics and society, it presents particularly serious questions about Canada’s commitment to the UN Declaration on the Rights of Indigenous Peoples and indeed to the work of reconciliation between Indigenous and non-Indigenous peoples.

The UN Declaration was put forward in the Final Report of the Truth and Reconciliation Commission of Canada as the framework for reconciliation. Calls to Action 43, 48, and 92 call on governments, churches, and industry to incorporate the Declaration’s principles, norms, and standards in their policies and practices. These principles include the rights of Indigenous peoples to participate in decision-making and to a process of free, prior, and informed consent (FPIC) before any development takes place on their land.

The exercise of these rights is absent from the debate on Kinder Morgan. First Nations along the pipeline path, whether they are in favour of the development or not, are not at the decision-making table. Instead, discussions occur between Alberta and British Columbia, or between the provinces and federal government. Both Chief Stewart Phillip of the BC Union of Indian Chiefs (which is opposed to the pipeline) and Stephen Buffalo of the Indian Resource Council (which is in favour) agree that FPIC and the nation-to-nation relationship necessitate a third order of representation: Indigenous.

The pipeline is currently stalled, as Kinder Morgan ceased non-essential spending on it after occupation of the site by some First Nations and allies. The company has said it will consult with stakeholders before making a final decision by May 31, 2018. First Nations continue to advocate for their role in decision making and one, the Tsleil-Waututh, has asked churches to join with them in a day of action on Burnaby Mountain on April 28.

As a part of our commitment to reconciliation and the UN Declaration on the Rights of Indigenous Peoples, we urge members of the United Church to respond to this situation. We ask that you show your support for the rights of Indigenous peoples to participate in decision making and to free, prior, and informed consent.

Many people are concerned that recognizing and implementing these rights is a drastic change that will change everything about how Canada works. They are right. It will change the way we make decisions on resource development, which can have both positive and negative impacts for Indigenous communities. It will ensure that the development that occurs on Indigenous land happens with their consent—that it does not harm the land and water they rely on not just for food but for spiritual identity, and that it contributes to their economic development. It will be a new way for Indigenous and non-Indigenous peoples to be in relationship with each other.

What can you do?