Join the call for peace 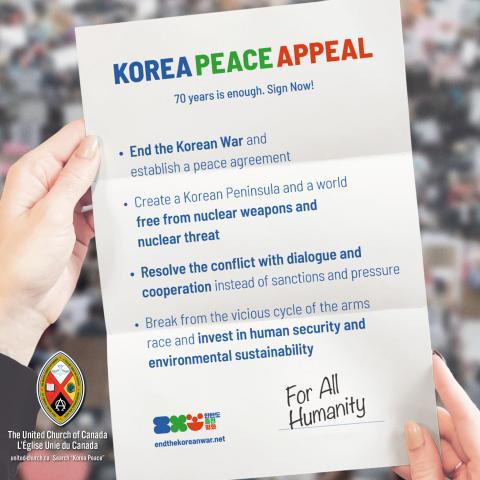 Credit: Korea Peace Appeal and The United Church of Canada
Published On: April 19, 2022

This month, leaders of several Canadian denominations and ecumenical bodies join the call for peace in Korea and publicly endorse the Korea Peace Appeal campaign as champions:

In this Easter season, the World Council of Churches invites us to pray with the National Council of Churches in Korea their 2022 Easter Prayer for Peace and Reunification on the Korean Peninsula (also available in Korean). As well, all are invited to A Call to Prayer and Action for Peace in Korea, a special livestream worship service with the Rev. Eun-kyung Kim, Moderator of The Presbyterian Church in the Republic of Korea, at 9:00 a.m. ET, 27 April 2022, on The United Church of Canada YouTube channel.