Postcard from the Heart 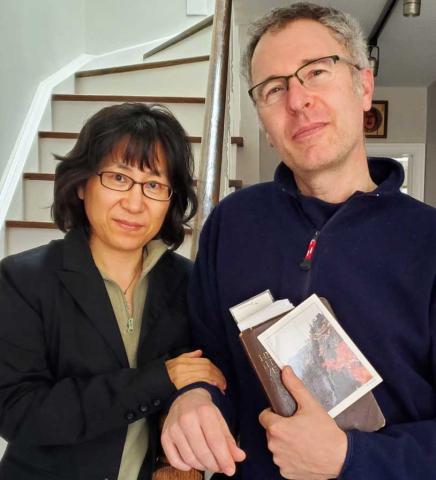 I met my wife-to-be in September 1995 on the campus of Emmanuel College in Toronto. HyeRan was an exchange student from Korea. As Student Council President that year, I was (self-)assigned the responsibility to make sure she was happy in her new Canadian surroundings. One thing led to another and by Christmas we were dating.

In the early stages of our relationship, we would exchange romantic notes from time to time as new couples are wont to do. On one such occasion, she gave me a postcard with a picture of the Diamond Mountains on it. The Diamond Mountains (known as the KumKang Mountains in Korean) are some of the most breathtakingly beautiful and culturally significant mountains in Korea. The card pictured an autumn scene. Atop a distant mountain peak are silhouetted four people, perhaps a family. One person’s arms are outstretched to the sky and the others are pointing into the distance. As a postscript to her message on the back of the card, HyeRan wrote the following: 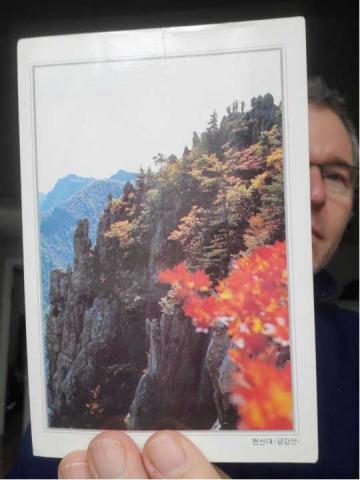 The postcard of the Diamond (KumKang) Mountains.
Credit: Courtesy of David Kim-Cragg

At the time I knew little about Korea except that it was divided into north and south. I also knew little about those who would someday become my in-laws. As HyeRan and I got to know each other better, I learned that both her parents are from what is now North Korea. I also learned that communication between north and south, let alone in-person visits, were strictly illegal. HyeRan’s family members, including two grandparents, aunts, and uncles lived north of the border. She had never seen them and nobody knew if they still lived or not. In addition to family, there were places of tremendous beauty and historical meaning for all Koreans in the north of the peninsula that she and her family in the south were barred from visiting. The Diamond Mountains were only one example.

Among the many small gifts and cards we have exchanged during our 20 odd years of marriage, this postcard has special meaning for me. For one thing, it was a moment when HyeRan opened a window on a place and a history, at once beautiful and tragic, that I had never laid eyes on before. More than that, it was an introduction to her family, to their story, and to their hopes for the future. I have not lost that card. I put it in my Bible as a place marker for the stories in the Hebrew scriptures, stories of a family and a people and their quest to reach the Promised Land.

I have not forgotten that hope of visiting the Diamond Mountains with her family, which my wife expressed, either. For a while, the two sides of Korea had come to an agreement where people from the south could visit Mount KumKang as tourists and I wondered if there might be a chance. Sadly, ongoing tension meant that tourism from the south was closed down and our chance was lost. This winter, my mother-in-law passed away. Not only did we not get to see the Diamond Mountains together, she died having never again laid eyes on her hometown or the friends and family that surrounded her there as she was growing up.

As a Canadian, I wonder how this tragedy of separation is permitted to continue. Will it be left to my children to visit the north without me or their mother? How long will it take to bring an end to a war that has divided families and nation for decades? When will we reach the Promised Land of peace and justice?

— David Kim-Cragg grew up in Sudbury and lived in Korea a total of 5 years. He is currently the minister of St. Matthew’s United Church in Richmond Hill, Ontario and is author of Water from Dragon’s Well: The History of a Korean-Canadian Church Relationship.