The resurrection doesn’t just mean that Jesus has escaped death. It means that the whole mission starts over again. 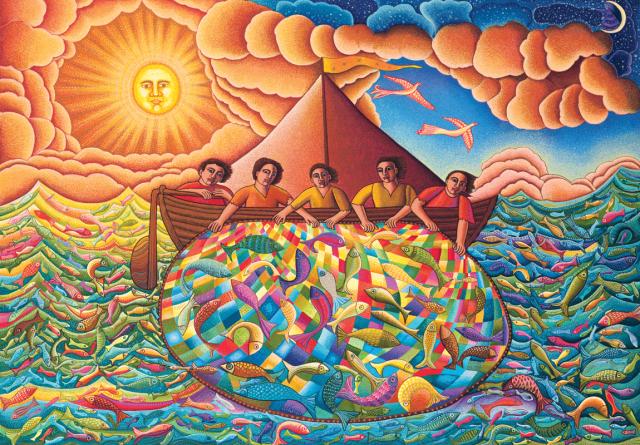 Credit: Swanson, John August. The Great Catch, from Art in the Christian Tradition, a project of the Vanderbilt Divinity Library, Nashville, TN.
Published On: May 4, 2019

A campfire? John’s gospel ends with a campfire on the beach?

I like a fish fry as much as the next person, but this seems like a really odd way to end the story. After the empty tomb, the scars in Jesus’ hands, and the easing of Thomas’ doubts, it seems a bit anticlimactic. Where are the fireworks? Where’s the celebration? Why end the story with something so ordinary as cookout beside the water?

They shouldn’t even be on the beach at all. They haven’t fished in three years; Jesus is risen; even Thomas has started to trust. They ought to be out telling the news and starting the church. But here they are at the Sea of Tiberias is a hundred miles away from Jerusalem, where we saw them in last week’s lesson. That’s several day’s journey. What could have possessed them to go all the way back home, after all that they’d seen and done in the capital city?

In our church celebrations, Easter happens in an instant. We wake up on Sunday morning, tidy up after the Easter bunny, and Good Friday is nothing more than a distant memory. In real life, not so much. In real life, it takes time to wrap your brain around new life after catastrophe has happened. In real life, part of you can be relieved and hopeful at the same time as another part of you is still tired and afraid and longing for something comfortable. Trusting in resurrection is more than just saying “yes.” It’s more than just waking up to new possibilities. Trusting in resurrection is about finding the energy to leave behind the comfortable – again – and set out on yet another adventure.

I don’t blame Peter and his friends for being leery of that. I don’t blame them for heading for the lake. Even if they didn’t intend to stay there forever, I understand why they needed to do something that felt familiar, predictable, and “normal.”

The response to “Do you love me?” isn’t just “come and eat.” The response is “get on with caring for other people.” Jesus wants to take care of our needs – our grief, our hunger, our need for hope. But he builds his community around the whole notion that our job is to feed everybody else. In this story, loving Jesus isn’t an invitation to a potluck supper, it’s a call to action.

Come to the fish fry. Find some nourishment when you’re in need of comfort food and normality. That’s surely a part of healing after catastrophe, and even Jesus understands when we need that. But then, let’s get on with feeding the sheep. That’s where community is built. And who knows where the next adventure might take us!