For Asian Heritage Month, Nobuko Iwai shares her experience of being born in Japan and raised in The United Church of Canada. 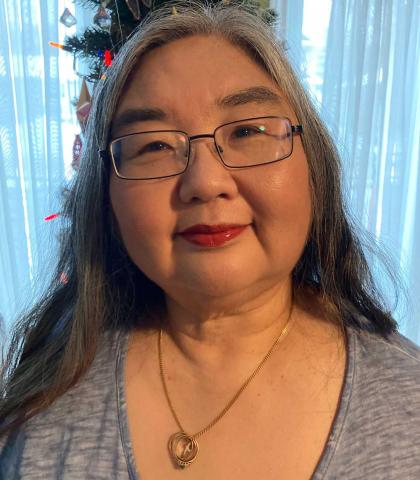 I grew up in The United Church of Canada. The Japanese United Churches then were part of a Kyogikai (or association) where the ministers and families moved around like Methodist circuit riders. As we moved every five years, this allowed me the privilege of growing up in different parts of the country until I began my own theological studies. I now live in Saskatoon with my partner, Doug Ponto, a retired United Church Minister of German descent, and serve at Grosvenor Park United Church.

I remember as a child having the Christmas pageant in our church. The stable, painted by someone in the congregation, was an Asian-looking building. The animals were Asian animals, the Magi were “wise people” from traditional Japanese lore. I believe that Momotaro-san (The Peach Boy) was one of the Magi.

Growing up in a Japanese United Church meant that I was with people who looked like me. We knew what it meant to look Japanese, and how it affected our lives. Our experiences of bias and discrimination were similar.

As a child, I also remember the taunting, the songs sung by other children around being Chinese or Japanese, having dirty knees, and children pulling their shirts forward to mimic having large breasts as “Look at THESE” was shouted.

Even as an adult I have experienced bias and discrimination: being yelled at on the street; people mangling my name; people questioning whether I should be a minister; people looking at me as a new minister and turning around and walking out the church door; discussions about whether I should participate in Canadian Remembrance Day activities; and many other situations.

I was privileged to reflect on these experiences in a thesis for a Master’s of Sacred Theology: With Almond Shaped Eyes of Faith: Towards an Understanding of Church and Community for Third and Fourth Generation Japanese Canadian Women. That study helped me to grow and accept myself. And as I have grown older, I am no longer trying to hide my differences, no longer trying to futilely blend in with the White majority.

When COVID began, I saw the rise in anti-Asian hate, fueled by ignorance, hatred, and fear. I saw this hatred in Saskatoon, and I saw it globally. On March 16, 2021, the killings of mainly Asian women in Atlanta, Georgia, shocked me into action. I became part of an East Asian Women’s group in Saskatoon, created to talk about issues around racism and discrimination. I learned more about the myth of the model minority, and together we learned about our similarities and differences as East Asian women.

Additionally, the generational and cultural differences between my parents and me were that much wider. My parents never experienced the racism I encountered growing up. They grew up with Japanese biases, discrimination, and racism, in particular towards Indigenous and Korean peoples. As Christians they were marginalized. Yet, they grew up looking like the majority in Japan. They also had a healthy sense of self. It is not unusual for people to be misunderstood by their parents as I was. Even so, I was privileged to be loved and cherished by them.

Still, they could not understand what I encountered, what I absorbed, being formed and living in the context of Canadian culture and biases. There was a sense of self-hatred, internalized discrimination, and embarrassment when my mother sent me to school with beautifully created bento boxes for lunch, when I would have been happier with a bagel and cream cheese or Chef Boyardee canned pasta in a thermos.

This particular cultural and generational difference was markedly different from those whose families had multigenerational experiences in Canada. They knew what racism was in Canada, and how it affected their parents, grandparents, great-grandparents, and their own families as well. They have had their own journeys and healing to do. We are certainly on parallel journeys, but not quite the same.

My 30+ years of church experience, with the exception of a short internship at Saugeen (Anishinaabe), I have been in White-majority churches. As a non-white person, I was more readily accepted at Saugeen, which was a privilege. And now I am filled with joy when I see difference in our congregations being cherished.

One of the highlights of my ministry was when I became the president of Saskatchewan Conference: the first non-White person to take this role in its then 80 years of existence. And while no one mentioned that I was of Japanese heritage, since in those days being polite and nice meant being “colour blind,” it was a hugely meaningful role for me to take.

I have been able to see so much of this wonderfully blessed and broken country. I have been privileged to be a child of the church. And I’m excited to see what adventures may follow.

— Nobuko Iwai (Noh-boo-koh Ee-wah-ee) is a 1.5 generation (born in Japan, raised in Canada) Japanese Canadian woman, a minister, and a multi-generational preacher’s kid. In Japanese, my name means woman of faith, taken from Luke 1, at the meeting of Elizabeth and Mary. My last name means Well of Rock. I am currently pastor at Grosvenor Park United Church, Saskatoon, SK.